Antibiotic prescribing for chronic obstructive pulmonary disease and respiratory infections has been highlighted as an area that needs more attention in the latest antimicrobial use and resistance report.

Antimicrobial Use and Resistance in Australia 2019: Third Australian report on antimicrobial use and resistance in human health (AURA 2019), released by the Australian Commission on Safety and Quality in Health Care, highlights that overall use of antibiotics in the community fell between 2015 and 2017 — the first decline in 20 years.

But in the hospital setting, the picture is not as encouraging, with the report finding that total antibiotic use in hospitals that participated in the National Antimicrobial Utilisation Surveillance Program (NAUSP) increased for the first time since 2013 from  932.8 defined daily doses (DDDs) per 1,000 occupied bed days (OBDs) in 2016 to 956.8 DDDs per 1,000 OBDs in 2017.

And 23.5% of hospital prescriptions assessed were found to be inappropriate, with cefalexin and amoxicillin–clavulanic acid having the highest rates of inappropriate prescribing.

The report noted that there was a long-term trend in hospitals of high levels of inappropriate prescribing of antibiotics for exacerbations of COPD.

“Targeted strategies and guidelines to improve the appropriateness of antibiotic prescribing for treatment of COPD in hospitals will require collaboration between clinicians involved in antimicrobial stewardship and the specialists managing patients with COPD,” it said. 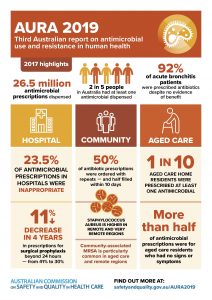 “While the downward shift in prescribing will help to slow the spread of resistance, these latest AURA findings indicate that the levels of inappropriate prescribing of antibiotics in hospitals and the community are still too high and there is more work to be done,” said Dr Kathryn Daveson, Clinical Director of AURA.

Also commenting on the report, Professor John Turnidge AO, the Commission’s Senior Medical Advisor, said: “The AURA reports are a key resource in Australia’s fight against the threat of increased antimicrobial resistances, including Critical Antimicrobial Resistances (CARs) that are resistant to last-line antibiotics.”

“This latest report is one of the most comprehensive of its type in the world. It will help give clinicians and health policy makers across Australia the data and information they need to develop targeted approaches to prevent and contain resistance,” he added.