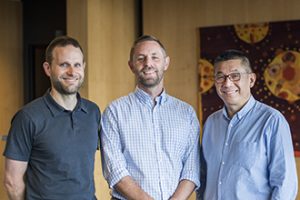 Victorian researchers have characterised a protein, VDAC2, as a key component of the apoptosis process used by anti-cancer agents such as venetoclax.

Walter and Eliza Hall Institute scientists have identified VDAC2 (voltage-dependent anion channel 2) as important for the function of the protein BAX to drive apoptotic cell death.

BAX is one of two essential mediators of apoptosis – along with BAK   – and is critical to prevent tumour formation.

Published in the journal Nature Communications, the team’s research also shows that VDAC2 is part of the mechanism used by many anti-cancer agents to eliminate tumour cells.

“BAX helps to take a cell to a ‘point of no return’ when apoptotic cell death is triggered, forming pores in mitochondria, the powerhouses of the cell. This unleashes the final ‘executioner’ proteins that dismantle a cell,” explains co-author Dr Mark van Delft.

“Understanding how BAX functions could lead to new therapeutics that either promote cell death – with applications for diseases such as cancer – or therapeutics that prevent cell death, which have the potential to save cells in conditions such as neurodegenerative disorders or stroke,” he said.

The team investigated how BAX and a related protein called BAK kill cells, knocking out the function of different genes using CRISPR technology.

“To our surprise we discovered a gene that was essential for the function of BAX but not BAK, despite these two proteins being functionally and structurally very similar,” said Associate Professor Grant Dewson of the WEHI Cell Signalling and Cell Death Division.

“We were able to follow up on this research to show that the protein, called VDAC2, was a catalyst that helped BAX associate with mitochondria and form pores in their membranes, to kill the cell,” he said.

Co-author Professor David Huang said a failure of the cell death machinery is a hallmark of cancer cells, and is linked to the resistance of cancer cells to anti-cancer treatments.

“BAX is important for helping anti-cancer agents kill cells – without BAX and its relative BAK, cancer cells cannot undergo apoptosis when treated with a range of anti-cancer therapies.

“Our research showed that VDAC2 is required for BAX to drive the response of cancer cells to conventional chemotherapy agents as well as the recently developed BH3-mimetics,” Professor Huang said.

In their article, the researchers noted that many chemotherapeutic agents indirectly trigger BAX/BAK-mediated apoptosis whereas BH3-mimetic compounds, such as venetoclax (ABT-199), directly inhibit BCL-2 proteins to drive apoptosis.

Venetoclax, which selectively targets BCL-2, has proven highly efficacious for patients with high-risk chronic lymphocytic leukaemia (CLL) leading to its approval for treating such patients.

“Taken together, we have shown that the VDAC2:BAX interaction promotes BAX to mediate apoptosis and this clearly differentiates it from BAK. Thus, we hypothesise that manipulating this interaction may well be therapeutically beneficial in situations where BAX, rather than BAK, is the principal mediator of apoptosis,” they conclude.

“In the context of cancer chemotherapy, BAX is likely the prime driver for certain cytotoxic agents to act. Our findings are also highly relevant for treatment with venetoclax since its target, BCL-2, principally limits BAX rather than BAK.

They note that primary and secondary resistance remains a problem with venetoclax in the treatment of conditions such as CLL.

“Thus, our findings suggest that in addition to BAX, mutations or silencing of VDAC2 could be a potential driver of resistance to venetoclax.”