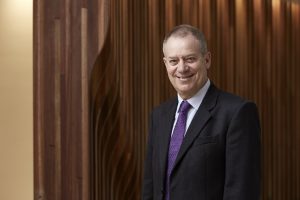 Professor Joe Trapani is the director of the new centre for cancer immunotherapy in Melbourne.

A new cancer immunotherapy centre is poised to open in Victoria with the lofty ambition of bringing immune-based therapies to people with every type of advanced cancer within five years.

The Centre for Cancer Immunotherapy, which opens later this year in the Victorian Comprehensive Cancer Centre (VCCC) in Melbourne, brings together Peter MacCallum Cancer Centre, the University of Melbourne and Melbourne Health and seven other VCCC alliance partners, who between them are now running 50 clinical cancer trials with an immunotherapy element.

The centrepiece is a laboratory with capacity for up to 100 researchers. According to the centre’s director, Professor Joe Trapani, this lab will “provide an opportunity for investigator-led trials to be launched into the clinical trials capacity and developing new therapies we put together ourselves, including new combinations with existing standard therapies for cancer.”

The vision for the new centre is that within five years, Victorian patients with all types of advanced cancer will have access to a clinical trial with an appropriate immune-based cancer therapy, says Professor Trapani, who has been executive director of cancer research at Peter Mac since 2009.

Patients outside Victoria will also have the possibility of joining trials, he tells the limbic.

But to realise this goal, improvements must be made in the initial patient selection processes.

“One of the key issues at the moment is to try and understand why certain patients respond amazingly to immune-based therapies but in most trials anything up to 70% to 80% do not,” Professor Trapani says.

“We will need a suite of markers to evaluate each patient, in order to tailor therapy to maximise their chances of success and make sure the dollars allocated to immune-based therapies are spent as effectively and efficiently as possible.

Another focus of the centre will be how to combine immunotherapy with other mainstream cancer treatments.

“It’s not like they are going to disappear,” says Professor Trapani. “Patients will still be treated with surgery and to some extent with chemotherapy, targeted therapies or radiation.”

“At the moment patients are typically getting immunotherapy when everything else has failed, but ultimately we’d like to move immunotherapies closer to the start of the cancer and that means combining them in rationale ways with other forms of cancer therapy.

When it comes to investigating new treatments, one therapy in the spotlight is “adoptive immunotherapy” using chimaeric antigen receptor T (CAR-T) cells, which provides patients with tailored immune killer cells against their own cancer. Cells are harvested from a patient’s blood, modified in the test tube to “teach” them how to kill cancer cells, then re-infused back into the same patient.

On the back of success in hard-to-treat leukemias, including childhood acute lymphoblastic leukemia, it’s hoped this therapy can be adapted to treat common solid cancers.

Another priority is to increase the capacity of  immunotherapy clinical trials, through lobbying the federal government, winning grants and attracting interest from pharmaceutical companies to run their trials in Australia.

Professor Trapani says there is every reason to be optimistic about the future of immunotherapies, an area of research that Peter Mac has been involved in for the past 18 years.

“Ten years ago there was no proven cancer where immunotherapy worked and now we have got about 20. Some are staggering like advanced melanoma, some forms of lung cancer, Hodgkins disease.

“Sure we have got a long way to go, (but) it’s often presented as something that’s on the horizon, or shows great promise. That’s an understatement. It’s not on the horizon, or maybe we’ve reached the horizon, but there are already hundreds if not thousands of patients walking around in Australia today whose lives have been saved from cancer by immunotherapy.

“We know these therapies given appropriately to the right people are life-savers, what we don’t know yet is how to maximise that opportunity. So I think in five or ten years time the outlook for patients, which was already improving for a range of reasons, is going to be much improved as a result of the advent of these therapies and in 10 or 20 years cancer will be seen broadly as a different set of diseases to how we appreciate them now, and how we have appreciated them in the past.”