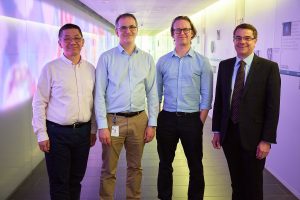 The prestigious 2019 Prime Minister’s Prize for Innovation has been awarded to a team from the Walter and Eliza Hall Institute for their roles in the discovery and development of the BCL-2 inhibitor venetoclax.

The development of venetoclax began with a landmark discovery made at the Institute in the 1980s that the BCL-2 protein called helps cancer cells survive.

In partnership with Genentech, a member of the Roche Group, and AbbVie, the team discovered and developed venetoclax in a remarkably short time.

Venetoclax was approved by the US Food and Drug Administration in 2016 and by the TGA in 2017. The drug was listed on the PBS in March 2019 for patients with relapsed or refractory CLL.

Haematologist and WEHI Cancer Research and Treatments theme leader Professor Roberts, who led the world-first clinical trials of venetoclax in Melbourne, said venetoclax was replacing chemotherapy for many CLL patients in Australia and worldwide.

“This really is a triumph of basic science and translational innovation, enabling the generation and rapid regulatory approval of a product that is significantly beneficial for many people,” Professor Roberts said.

More than 150 clinical trials are currently underway to investigate venetoclax for use in CLL and other cancers.

“When people come from different backgrounds and take a multi-dimensional view of the same human problem, it delivers a much richer perspective,” he said.

“The exceptional and innovative contributions of the researchers involved showcase the direct benefit to the economy, and to society, of investing in Australian medical research,” Professor Hilton said.