Early career doctors should not despair over finding a position in the dog-eat-dog teaching hospital environment, but head bush where opportunities are plentiful.

This is the message being sold by a senior clinical haematologist who has been trying in vain for almost a year to recruit a colleague to join the haematology unit at Dubbo Health Service in western NSW. 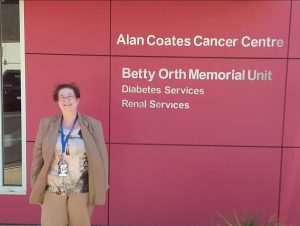 Dr Susan Moreton is a clinical haematologist based in Dubbo.

As reported recently in the limbic, a survey of early career medical oncologists described their employment search as a ‘dogfight’ and many feel forced to do PhDs in order to compete for the few jobs available in city teaching hospitals. They blamed the situation on a mismatch in jobs to training positions and senior consultants staying on past retirement age.

Clinical haematologist Dr Susan Moreton says trainees in haematology can bypass the angst to get their foot in the door if they are prepared to move to a regional area.

Dr Moreton was based in Brisbane for decades before relocating to Dubbo in 2010 to become the only permanent haematologist in the city (population 36,000).

For almost a year the Dubbo Health Service has been advertising for a second clinical haematologist to build up its haemaotology unit, she says.

Until the position is filled, the unit remains in a holding pattern unable to fill an advanced trainee and lab positions.

“We have had several rounds of advertisements and about half of them go unanswered. (Of the rest) sometimes we even appoint people and then they pull out and other times we don’t have anyone who’s suitable,” she tells the limbic.

Dr Moreton says she is puzzled at this seeming reluctance for early career doctors to consider a rural posting.

“I chose to come here, so I find it a little bit hard to understand,” she muses. “I think people are concerned about schooling. We have great primary schools and pretty good secondary schools.

“We don’t have traffic jams, peak hour lasts for approximately a minute-and-a-half and the lattes are not bad.

“The cost of living is great, we’ve got a movie cinema, we’ve got the internet which is all you need to go shopping these days, and we’re 45 minutes from Sydney on a plane. So if you want to go see a show, you can probably fly there faster than you can drive there from wherever you live in the city.”

Despite the difficulty she is having recruiting a colleague, Dr Moreton says more specialists are moving to the regions.

In the eight years since she arrived, Dubbo has gained a neurologist, gastroenterologist and rheumatologist, who join several other full-time specialists. This trend was also observed in the regional Queensland city of Townsville, which over time went from having no haematologists to nine, she says.

“So things are improving. And it’s like a black hole, it tends to suck things in so the more you get the more you get. So once you’ve got a critical mass, things start to get sucked in.”