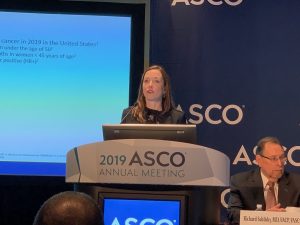 The CDK4/6 inhibitor ribociclib has shown a survival benefit in younger women with advanced breast cancer, according to trial findings presented at ASCO 2019.

In the phase III trial, 672 women under the age of 59 with HR+/HER-advanced breast cancer were randomised to treatment with ribociclib or placebo in addition to standard endocrine therapy (goserlin and non steroidal aromatase inhibitors or tamoxifen).

Progression free survival rates were 23.8 months for women who received ribociclib and 13 months for placebo.

“This is the first study to show improved survival for any targeted therapy when used with endocrine therapy as a first line treatment for advanced breast cancer,” she said.

“The use of ribociclib as a front line therapy significantly prolonged overall survival, which is good news for women with this terrible disease.”

Speaking at an ASCO briefing, Dr Harold Burstein, an oncologist at the Dana-Farber Institute, Boston, said this is the first time a statistically significant improvement in OS has been observed with a CDK4/6 inhibitor in combination with endocrine therapy in patients with hormone receptor positive advanced breast cancer.

“This is an important study because it shows that a class of drugs we are already and which we know delay the time to disease progression, delay the time to chemotherapy and really double the effectiveness of endocrine therapy – now we are seeing that translate into a significant survival benefit for women who have ER+ breast cancer,” he said.

“I think one of the myths that this study helps suppress is that younger women with ER+ breast cancer have a fundamentally different outcome to older women – actually their outcomes look very similar,” he said.

“Advanced breast cancer in pre-menopausal women can be very aggressive, so it is important and encouraging to see a targeted therapy that significantly increases survival for younger women with this disease,” he concluded.

Ribociclib (Kisqali) was subsidised on the PBS in 2018 for women with metastatic breast cancer.

The study received funding from Novartis.