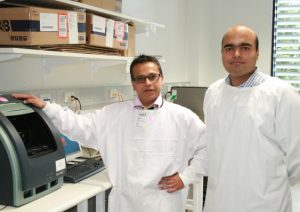 Researchers have developed a high-resolution mass spectrometry technique to help predict response to azacitidine (Vidaza) therapy in patients with conditions such as myelodysplastic syndrome (MDS).

The AZA-MS method, as described in the latest issue of Leukemia, can directly quantify cellular uptake of azacitidine and its incorporation into both DNA and RNA.

The research found two patterns of non-response in patients being treated with azacitidine for either MDS or chronic myelomonocytic leukaemia (CMML).

The first group of non-responders were shown to be not taking up the drug as well as drug responders. They had low levels of 5-AZA-CdR [why this decitibine, and not azacitidine?] incorporated into DNA and low levels of DNA demethylation.

Professor John Pimanda, head of the Adult Cancer Program, at the University of NSW’s Lowy Cancer Research Centre, said there was a direct link between cell division and how much drug would be taken up.

As previously reported in the limbic, quiescence in haematopoietic progenitors might help explain this type of non-response.

“In these patients, all we might need to do is stimulate cell cycling to get them to multiply – for example give a growth factor or interfere with cell adherence to the bone marrow stroma which also stops them from multiplying.”

However the research also identified a second group of non-responders despite taking up the drug at levels comparable to azacitidine responders.

Professor Pimanda said one explanation was that these patients might not be activating an inflammatory signal critical to inducing a clinical response.

He said the new mass spectrometry technique will be used to develop an early response score with non-responders then channelled into trials that either encourage cells to multiply or increase demethylation via other means. He added checkpoint inhibitors might be one option.

The AZA-MS will also be incorporated into a proposed clinical trial of azacitidine tablets versus the current injectable form of the drug.

“For the first time we can actually measure directly whether more drug is getting into cells via a tablet than via injection.”