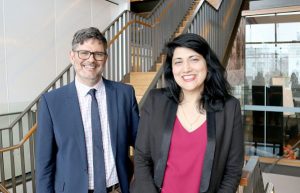 The IL 23 inhibitors, effective in inflammatory conditions such as psoriasis, could be repurposed to treat patients with bone and soft tissue sarcoma.

Researchers from the Garvan Institute have recently demonstrated that IL 23, regulated by the glutamate metabotropic receptor 4 (GRM4), is central to the development of osteosarcoma.

The findings, published in Cancer Discovery, suggest IL 23 antagonists or GRM4 agonists might be effective in suppressing tumour growth.

Professor David Thomas, head of the Garvan’s Cancer Division, told the limbic that using IL 23 directed drugs such as a guselkumab and tildrakizumab seemed the most promising approach given they are already approved and well tolerated.

“We are fortunate that we have set up a national rare cancer screening and treatment program where we’ve screened over 350 sarcoma patients in the past 2.5 years.”

“What we are proposing to do is treat 32 people with either bone or soft tissue sarcomas with these anti-psoriasis drugs and see if we can get a hint that the things we have seen in mice, turn out to be true in humans.”

“It’s a signal seeking trial – a go/no go study. If we see something then we have a green light for further work to see how to use these drugs well.”

“If we don’t see anything at all then it means that, as is often the case in research, promising observations in mice don’t actually turn out to be transferable to man. But if we don’t ask the question, we won’t know and this is the fastest way we can get there.”

He said they planned to open the study in early to mid 2020 and have results by early 2021.

The experimental research found GRM4 knockout mice develop osteosarcoma faster than mice that have an intact GRM4 and mice without IL 23 were protected from developing osteosarcomas.

As well, when the researchers blocked IL23 in mice with existing osteosarcoma, tumour growth was slowed.

In their human studies, the researchers found 70% of human osteosarcoma biopsies had significantly higher levels of IL23 than non-tumour tissue. High IL 23 expression was also associated with worse survival.

“We’re not quite sure what that means because you could say any tissue injury causes an inflammatory response of some kind and there will be a whole lot of cytokines that might well go up whenever you damage tissue.”

“At least for soft tissue sarcoma and for bone tumours, in the mouse models that we have been doing, we know that it [IL 23] is actually rate limiting for tumourogenesis. So it is not a bystander and it is actually important for tumour progression.

“Whether that is true of other cancer types, I think remains to be proven.”

The researchers noted that a Danish cohort study found patients with psoriasis were almost five times more likely to develop sarcomas than others without the skin condition –  reaffirming the central role IL23 plays in osteosarcoma.