Neoadjuvant treatment with the PD-L1 inhibitor atezolizumab has shown promising results in patients with operable non-small cell lung cancer in an interim analysis of the LCMC3 trial presented at ASCO.

Study lead investigator Dr David Kwiatowski, an oncologist at Brigham and Women’s Cancer Center and Dana-Farber Institute, told delegates that immune checkpoint therapy was a standard of care in advanced lung cancer but the current results suggested that it may also be beneficial in early-stage operable disease. 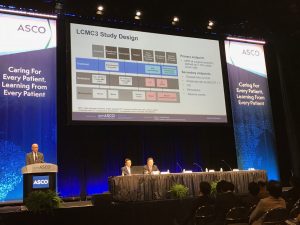 However tumour mutational burden was not correlated with MPR or pathological regression.

The researchers reported one cardiac death after resection, and one death due to disease progression. There were 29 grade 3 or higher adverse events, of which 6% were considered treatment-related.

Dr Kwiatowski said the findings were encouraging and there was now a phase 3 trial underway with atezolizumab combined with platinum-based chemotherapy as neoadjuvant therapy in the patient population.

In an ASCO panel discussion following the results of LCMC3 and other trials Dr Max Diehn, an oncologist at the Stanford Cancer Institute, said trials showed that neoadjuvant  immunotherapy offered advantages of addressing micrometastatic disease early, potential for increased compliance with systemic therapy, and potential translation of pathological responses into better overall survival.

However it had the potential downsides of delaying surgery and a risk of progression prior to surgery.

Of the various biomarkers,  circulating tumour DNA offered the best results in terms of monitoring treatment response, said Dr Diehn in the session called neoadjuvant immunotherapy: Why, How, When.

He observed that studies of neoadjuvant chemotherapy had shown similar MPR rates as neoadjuvant immunotherapy.

“This suggests we might want to consider combining the two, much as we already do in the advanced setting, “ he said.

Early results from trials of such approaches had shown higher MPR rates, he added.

“So in summary I think the current data that we have – which is still limited – suggests that a combination is the most active approach.”