Need for bone marrow biopsy now in question for many cancers 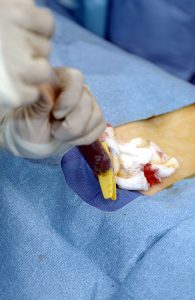 While bone marrow examination has been the gold standard for diagnosis of myelodysplastic syndromes (MDS) for many years, a new non-invasive diagnostic model may help patients avoid the unpleasant procedure in about half of cases.

Israeli researchers have shown that a combination of six simple clinical variables including haemoglobin and white blood cell counts was able to diagnose or exclude MDS in about half of patients in whom the condition is suspected.

In a study involving 48 patients with MDS and 63 patients who underwent bone marrow biopsy for anaemia they showed that their mathematical probability method correctly predicted the disease in 50% of patients, was indeterminate in 40% and was incorrect in 10%.

Writing in the journal Leukemia and Lymphoma, the researchers say that in practice the model could help many patients suspected of having MDS avoid the need for a bone marrow exam, with only those having indeterminate results requiring discussion about invasive tests.

“For those 10% of the patients whose MDS diagnosis was missed, the persistence of a concerning and unexplained anaemia or other cytopenia would likely encourage the physician to consider performing a bone marrow examination to obtain a definitive diagnosis,” they suggested.

While the model needed to be validated in larger numbers of patients, they said their study suggested that a simple and inexpensive non-invasive diagnostic technique could be an option for many patients to confirm or rule out the diagnosis of MDS.

Their conclusions were backed by Australian haematologists Dr Surender Juneja and Professor David Westerman, of the Royal Melbourne Hospital and the Peter MacCallum Cancer Centre in Victoria, who said that if validated, the model could change diagnostic practices.

In an accompanying commentary they said the value of routine bone marrow examination was now being questioned for many blood cancers including chronic myeloid leukaemia, acute myeloid leukaemia and chronic lymphocytic leukaemia.

“It is likely that in the not too distant future we will be able to obtain enhanced diagnostic and prognostic information from a simple blood sample, processing ct-DNA and obviate the need to perform routine  bone marrow examination on many patients with haematological malignancies, including MDS,” they concluded.

The values used in the probability score were: