Melanoma my be a risk factor for subsequent prostate cancer: COSA 2022 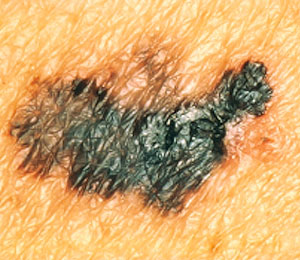 There is growing evidence that a history of a melanoma diagnosis is associated with up to a two-fold increased risk of a subsequent prostate cancer.

Speaking at the COSA ASM 2022 in Brisbane, epidemiologist Dr Visalini Nair-Shalliker said the value of previous evidence was limited by the possibility of detection bias.

For example, a 2019 systematic review had found melanoma patients were at higher risk of developing prostate cancer than the general population but said the association could be attributed to increased medical surveillance and/or increased vigilance of patients following their melanoma diagnosis.

She presented the results of an analysis of about 1,900 men with a history of melanoma from a cohort of more than 96,000 men in the Sax Institute’s 45 and Up Study.

The study, which linked to MBS data for PSA screening and monitoring tests and GP consultations, has just been published in the British Journal of Cancer [link here].

Dr Nair-Shalliker said the study confirmed men with a past melanoma diagnosis were at greater risk of subsequent prostate cancer diagnosis, even after adjusting for the frequency of PSA testing and GP consultations.

She said there was a 40% increase in prostate cancer risk in a minimally adjusted model for demographics and comorbidities.

“Additionally adjusting for GP visits as well as PSA screening, the risk was attenuated slightly but nevertheless remained significant across all levels of adjustment [HR = 1.32],” she said.

Additional adjustment for the MBS item number for PBS monitoring did not appreciably change HR estimates.

The study found the risk of subsequent prostate cancer was highest in men with a history of more than one melanoma (HR 2.22] and with >10-15 years since the melanoma diagnosis (HR 2.18).

She said androgens were implicated in both prostate carcinogenesis and in melanogenesis.

Dr Nair-Shalliker told the limbic that the next step would be to validate the findings in even larger data sets.

“And once we can validate, it gets us closer to identifying melanoma as a risk factor.”

“So now we do see a doubling of risk but remember with prostate cancer, we have the low risk cancers and also the clinically significant cancers.”

“So in the lower risk, slow growing cancers which have a very low risk of progression, then the clinical pathway is very different for them. It’s about active surveillance, monitoring and constantly keeping an eye on melanomas as well as the prostate.”

“However if the association is with clinically significant cancers then we know there is a higher risk of progression and the conversation would be very different.”

She said PSA testing guidelines were coming up for renewal.