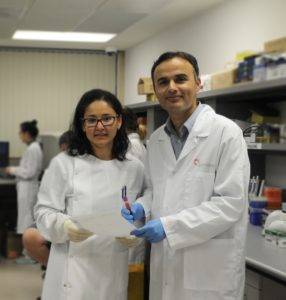 PD-L1 expression on circulating tumour cells (CTCs) in advanced melanoma appears to be predictive of patient response to pembrolizumab and an independent biomarker of progression-free survival, Australian research shows.

A small WA study of 40 patients commencing on pembrolizumab therapy for mostly first and second line therapy was able to detect CTCs in 63% of cases.

PD-L1 was identiﬁed in 64% of patients with detectable CTCs at baseline.

The study also found the total number of CTCs was similar in both responders and non-responders while the number of PD-L1+CTCs was significantly higher in responders.

The total number of CTCs and proportion expressing PD-L1 decreased with treatment in most responders and increased or remained stable in most nonresponders.

The study said their findings indicated that PD-L1 positivity in CTCs is an independent predictor of response and prolonged PFS in patients with melanoma treated with pembrolizumab.

“CTC based PD-L1 status was superior to other baseline clinical parameters associated with response and prognosis, including lactate dehydrogenase, disease stage, and ECOG performance status,” it said.

It therefore offered the potential as a future noninvasive real-time biopsy to evaluate PD-L1 expression in patients with melanoma.

Senior investigator Associate Professor Elin Gray, from Edith Cowan University, told the limbic that CTC was not yet available in the clinic.

The technique was difficult and laborious and required modifications to make it more microscopy based.

She added that the small study also required validation.

Meanwhile, serial sampling of CTCs would be particularly useful in helping to understand how cancer disseminates, and response and resistance to treatment.