Genomic assay may identify patients who benefit most from OFS 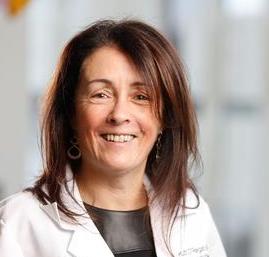 A genomic assay can predict long-term prognosis in premenopausal women with HR-positive, early-stage breast cancer, an international study has shown.

If validated, the assay may be able to help identify patients who benefit from ovarian suppression therapy, according to researchers who presented the results at the San Antonio Breast Cancer Symposium (SABCS 2022), on 7 December.

Lead investigator Professor Ruth O’Regan, chair of the Department of Medicine at the University of Rochester, NY, told the meeting that the landmark Suppression of Ovarian Function Trial (SOFT) in premenopausal breast cancer patients had shown that addition of ovarian function suppression (OFS) to adjuvant endocrine therapy reduces the risk of recurrence compared with adjuvant tamoxifen alone.

The benefit was greatest in patients at higher risk of recurrence but there were no biomarkers to aid decision-making about intensification of endocrine therapy with OFS and its resultant toxicities, she said.

“OFS increases short and long-term toxicity and is not tolerated by all patients … Therefore, determining which patients truly need OFS is crucial to avoid added toxicities in patients who are unlikely to benefit,” she said.

In a multinational study, researchers including Peter Mac Cancer Centre oncologists Prof Prue Francis and Prof Sherene Loi as co-investigators, evaluated a genomic assay, the Breast Cancer Index (BCI), based on the expression ratio of the HOX13 gene to the IL17BR gene (H/I ratio).

The BCI stratifies patients based on the risk of overall (0-10 years) and late (post-5 years) distant recurrence (DR) and predicts the likelihood of benefit from extended endocrine therapy in early stage HR+ breast cancer.

The results presented at SABC 2022 showed that in a subset of 1,687 premenopausal women with HR-positive, early-stage breast cancer enrolled in the SOFT trial, those with a high score on BCI were found to have increased risk of distant recurrence, and those with low BCI benefited more from the addition of ovarian suppression therapy to endocrine therapy.

After 12 years of follow-up, among patients without lymph node involvement, those with high BCI had a 98% increased risk of distant recurrence compared to those with low BCI. A similar increase was observed in patients whose cancer had spread to one to three lymph nodes.

Among patients with low H/I ratio, adding OFS to exemestane or tamoxifen resulted in reduced risk of recurrence after 12 years compared to treatment with tamoxifen alone (11.6% and 7.3%, respectively).

The predictive benefit of the H/I ratio was observed regardless of age, lymph node involvement, and receipt of chemotherapy.

“Previously, high H/I ratio has been shown to predict which patients benefit from longer durations of endocrine therapy, which could indicate sensitivity to such therapy. However, benefiting from OFS may not be related to endocrine sensitivity,” Professor O’Regan said.

“It is possible that patients with endocrine-resistant cancers may benefit more from OFS, which could explain our findings.”

“If validated, the H/I ratio may be useful to determine which premenopausal patients require OFS, thereby avoiding additional toxicity in those who are unlikely to benefit,” she added.

A limitation of this study is the small sample size. “Larger numbers are needed to validate our findings,” O’Regan said.