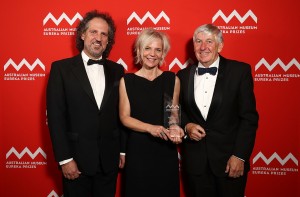 A ‘liquid biopsy’ blood test for colorectal cancer recurrence has earned its founders the 2017 Johnson & Johnson Eureka Prize for Innovation in Medical Research.

The award for Colvera™, a circulating tumour DNA test that detects methylated DNA from the BCAT1 and IKZF1 genes, went to biotech company Clinical Genomics and partners, the CSIRO and Flinders University.

Dr Susanne Pederson, medical director of Clinical Genomics, said the test had been shown to detect twice as many cases of cancer recurrence as carcinoembryonic antigen (CEA) tests.

“Because Colvera is detecting very low numbers of copies – three copies of tDNA/ml plasma – the mass of tumour cells is very small. The CEA blood test being used right now needs much larger numbers of circulating antigens to call it positive.”

“But we also had a group of patients that were Colvera positive, CEA negative and also CT scan negative.”

“What we don’t know and the data we are waiting for now in expanded clinical trials, is if these patients have a recurrence that is smaller than what can be seen on standard imaging.”

“Did those who appeared to be a false positive actually recur in the last two years? If so, does it inform or change their management? For example, should imaging be brought forward or change treatment to something more aggressive?”

She said clinical trials were underway in Australia to address some of those questions. The test was also being assessed in the setting of breast, oesophageal and prostate cancers.

Dr Pederson added that a similar principle was used in their screening blood test for colorectal cancer.

“Sensitivity needs to be better in screening than what you potentially need for surveillance tests. With distal tumours in the lung and liver, the signal is already in blood as the cells have already migrated.”

“An adenoma can be capsulated, hasn’t yet penetrated and may not have access to blood.”

A screening trial is expected to enroll the target number of 10,000 participants in the second half of 2018.