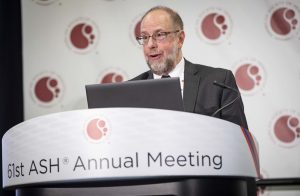 The study presented at ASH 2019 involved Medicare claims data from 207 patients, mostly with relapsed or refractory DLBCL, who received either axicabtagene ciloleucel or tisagenlecleucel and for whom there was data six months prior to and six months after treatment.

And about half (51%) of patients had one or more chronic conditions such as heart disease, chronic pulmonary disease or chronic kidney disease that would likely have excluded them from clinical trials.

However the outcomes data was good and appeared to be associated with lower healthcare costs after treatment.

The data showed patients spent 17% less time in hospital in the six months after CAR T-cell therapy than in the preceding six months.

The median length of stay was 17 days.

Slightly fewer than half of the patients also required an ICU stay as part of their inpatient stay.

“For those with an ICU transfer, they spent a median of 13 days in the ICU. This is the first year of CAR T-cell therapy so people might be a little cautious,” said Dr Kilgore.

ED visits were cut by almost half after CAR T-cell therapy compared to before, he noted.

“Overall healthcare costs, exclusive of costs associated with the CAR T-cell procedure itself, were 39% less in the six months after CAR T than in the six months preceding CAR T – a significant reduction in costs.”

“Older patients with multiple comorbidities can be successfully treated with CAR T. And by treated successfully we mean a reduction in hospital admissions, less time in the hospital, significantly fewer ED visits and lower total healthcare costs,” Dr Kilgore concluded.

Although the data was purely descriptive, it suggested possible equity issues in access to CAR T-cell therapy.

For example 87% of recipients were white, which is not representative of the overall US population.

And it reinforced questions about why older and possibly sicker patients should have been excluded from clinical trials.

Associate Professor Laura Michaelis, from the Medical College of Wisconsin, said it wasn’t yet known if delivery of the therapy was getting to the people who needed it.

“But we do know you could have put sicker patients on those studies. If these patients had been eligible for the clinical trials, then the drugs would have been approved a lot earlier as accrual would have been higher,” she said.

Dr Kilgore said plans were in place to construct a matched sample of patients who did not get CAR T-cell herapy in order to do the comparison.

“This is a study that should be done,” he said.