Cancer surgery will be transformed by semi-autonomous robots

Semi-autonomous robots are set to transform the landscape of cancer surgery in a way not seen since laparoscopy in the 1990s, a conference has been told. 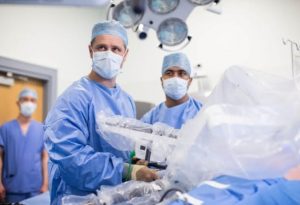 Dr Caterwell (left) with a colleague.

One of the next-generation robotic surgery devices recently trialled in Australia is the PROCEPT, an aquablation platform, has the capacity to more than halve the time it takes to perform a transurethral resection of the prostate (TURP), explains Dr Rick Caterwell.

Speaking at the Australian Medical Students Association National Convention in Perth on 3 July, the consultant urologist and surgeon based at the Queen Elizabeth Hospital, Adelaide, said the future of robot-assisted surgery would be push-button procedures.

The PROCEPT platform is used to map the prostate with ultrasound and then uses high pressure water jet to make the cavity that would otherwise be made using electrocautery, he told the limbic.

“So although it still needs the surgeon to map out the prostate and map out the area that needs to be resected once you push ‘go’ on it the robotic part of the equipment will make that cavity on what you’ve booked out.”

Semi-autonomous robots have been used overseas to perform colorectal, gynaecological, orthopaedic, ENT, cardiac and urological surgery, but Dr Caterwell said the PROCEPT trialled in Melbourne represents the first time one has been used in surgery in Australia.

While the name suggests a device that makes its own decisions, Dr Caterwell stresses the surgeon and robot have a “master-slave” relationship.

“So the surgeon directs all movement, the only active component during the surgery is performed by the surgeon.”

He say robotic surgery technology has come a long way in the past two decades. Where robots could previously perform tasks but were “clumsy and a bit slow”, today there are cases where they expedite surgery time for example in radical prostatectomy for prostate cancer.

“It takes someone usually an hour to do a TURP. This one, after you’ve programmed it which takes 10 to 15 minutes, it will do the procedure in about eight minutes.”

Dr Caterwall acknowledges that robot-assisted surgery is controversial, having attracted criticism over costs.

There are claims the hefty price tag does not justify the mediocre performance over current surgical alternatives, and could create an incentive for hospitals to over-treat in areas like prostate cancer where a more conservative approach is warranted.

But Dr Caterwall rejects the notion that the high costs of investment in robotic technology is driving overtreatment, arguing that the multidisciplinary teams act as gatekeeper to prevent this, and that in Australia robots are generally engaged for several types of surgery and won’t be sitting idle.

As costs comes down, he predicts robotics will take over as the “next generation of laparoscopy”.

“The real key of how we are going to change in the next five to 10 years I think will be the reduced cost and improved accessibility to robotics and that’s the most important change of this technology expanding in the future. There are a number of new surgical platforms that will be on the market.

The cost is likely to drop as manufacturers move from from disposable to reusable components, which at about $150-$200 per use are one of the major reasons robot technology is currently so expensive.

Dr Caterwell, who trained at a large public hospital in London where robots are commonly used in surgery, says the concerns about de-skilling also surfaced when laparoscopy was introduced in the 1990s.

“I think it’s a long way down the track before robots will be doing very fine technical aspects of the operation,” he says.

“In surgery we draw a lot of parallels to the aeronautical industry and I suppose the logical step is to say when will we be able to put the robot in autopilot and I think that’s a long way away.

“I think you’ll always need a surgeon who’s trained in the cockpit and I do think that simulation is a way that surgeons can have large volumes of what can be expected complications, or even very rare complications, so that they are able to perform in that situation.”

As someone who is enthusiastic about the technology Dr Caterwell is excited to see how robotics is continuing to transform the surgical landscape, but stresses the need for robust clinical trials.

“One of the many challenges of a surgeon is to assess what is worthy of adoption and there needs to be a balance between enthusiastic consideration of new approaches and critical evaluation,” he says.