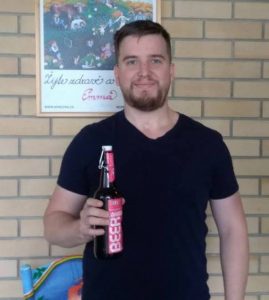 A Czech brewery has launched a highly flavoured beer designed to counteract the disordered sense of taste (dysgeusia) experienced by people undergoing chemotherapy.

Mamma Beer is a fruity, non-alcoholic beer that is being distributed through oncology wards and pharmacies after being developed  by the Zatek brewery, located north of Prague.

The beer is higher in sugar and lower in hops than traditional beers to lessen the bitter taste. It was developed in conjunction with breast cancer advocacy group Mamma Help, according to website Drinks Business.

“Chemotherapy is tough, and one of the side effects that many people are not aware of is a loss of taste. Everything tastes horrible, like metal,” says Tereza Sverakova, a Prague-based n advertising executive and former breast cancer patient who is helping to promote the ale.

Dr Karolina Hovorkova, an oncologist  in Prague says he has been distributing Mamma Beer to her patients at the Onkocentrum clinic since April.

“Chemotherapy in breast cancer patients often causes a loss in taste or a change of taste that leads to a lower intake of nutrients than patients need during their treatment,” she told NPR.

The beer was developed by Jana Drexlerova, CEO of  Mamma HELP, who used her experience of dysgeusia to help brewers create a beer flavoured with apple juice and fortified with potassium and vitamin B, to counter the metallic bitterness that is induced by chemotherapy.

“I wanted the beer to boost nutrition and improve health during treatment,” says Drexlerova. “It was also important for me to give these women back a sense of normalcy in their lives.”

Meanwhile, in Australia, fruit growers in Far North Queensland have come up with their own answer to dysgeusia in the form of the ‘miracle berry’ fruit (Synsepalum dulcificum).

Chris Beckwith and his partner Karen Pereira say the fruit has sweetness-enhancing properties that make it ideal for people who have a disordered sense of taste from chemotherapy.

“Anything you eat for the next hour or so, be it a lime or a tomato or something that’s a bit acidic tastes so sweet,” they told the ABC.

The berry’s properties are thought to be due to he glycoprotein miraculin, which binds to the sweet receptor cells on tastebuds, making acidic, sour or bitter foods taste sweet.

However its usefulness is limited by the fact that the berry only retains its taste-enhancing properties for around 48 hours, or up to four weeks if the fruit is put in the freezer.

“I would love it if I could have 200 berries and send them down to a hospital in Sydney or Brisbane or Melbourne so that the whole oncology department, including nutritionists, oncologists, cancer nurses can try it together and understand what it does,” Ms Pereira told the ABC.