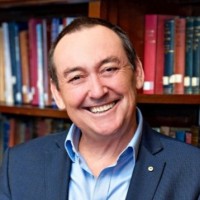 An Australian global cancer leader has revealed his diagnosis with mantle cell lymphoma as he takes on the presidency of the Union for International Cancer Control (UICC).

Professor Jeff Dunn AO, Chair of Cancer Survivorship and Professor of Social and Behavioural Science at the University of Southern Queensland, says that while his diagnosis of an aggressive blood cancer is serious, he remains upbeat and committed to take on the presidency of UICC as foreseen through to October 2024.

Accepting the role at the UICC’s World Cancer Congress in Geneva, where he appeared virtually, Professor Dunn said his cancer care team were confident of being able to bring the MCL into remission within a few months.

Professor Dunn, who is also Chief of Mission and Head of Research at the Prostate Cancer Foundation of Australia, told the Australian newspaper that he had been diagnosed with stage-3 MCL in mid-August and was now awaiting a stem cell transplant in December.

“No one wants to get any cancer, but if you were to choose one, you probably wouldn’t choose this one,” he said.

“It’s just a reminder again that cancer can affect any one of us at any time; this is the challenge of this disease.”

In his virtual presentation to the WCC meeting he said the impact of the coronavirus pandemic on cancer organisations around the world had highlighted the need to engage with governments to ensure that cancer care remains a top priority.

“Much of the UICC success sits with our members who have struggled and prevailed during the pandemic. Let’s make sure that we get even closer to our members so that globally we can make a difference. Let’s listen to the patient voice,” he said.

“Every year 20 million newly diagnosed join that group and each and everyone of them is important to us. And let’s make sure that the gaps in care that we see within and between countries are addressed. Thank you for letting me serve as your President. I embark on this journey with humility and confidence.”

The UICC outgoing president Professor Anil D’Cruz paid tribute to Professor Dunn’s dedication in the face of his illness.

“I often say in presentations that we are all touched by cancer in our lifetime. Even so, it still comes as a shock when someone so close receives a diagnosis of cancer. Jeff is taking on this new challenge with the same positive energy and focus he gives to so many things in his life,” he said.

“In Jeff, we will have a wonderful President and someone who will inspire our community to re-double our efforts to help cancer patients around the world.”