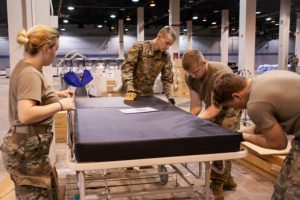 It was  meant to be the ASCO meeting place for 17,000 medical oncologists from around the globe but Chicago’s McCormick Place convention centre is now being converted into an emergency treatment centre with 3000 beds for people with COVID-19 infection.

The American Society for Clinical Oncology (ASCO) has cancelled its annual scientific meeting originally scheduled for May 29 – June 2, and the venue is now being repurposed by US army engineers and the Air National Guard as an “alternate care facility”. It will eventually be able to hold 3,000 COVID-19 patients who have severe symptoms that do not require intensive care.

With the state of Illinois already reporting more than 5000 cases and 73 deaths of COVID-19 the governor has announced that the gigantic McCormick Place venue will have 500 beds available by April 5 and a further 1,250 more by April 20.

The large auditoriums such as Hall B that were expected to be hosting audiences of thousands of oncologists attending presentations on new cancer developments will now contain 750 acute care beds according to Governor Jay Robert “J. B.” Pritzker.

“Based on best practices around the world on how to manage positive cases and contain this virus, McCormick will be dedicated mostly to non-acute COVID-19 patients, people who could benefit from the care of medical professionals but are not likely to need a formal ICU,” Gov. Pritzker said at a news briefing.

“If we never have to go beyond our existing facilities, we will all be very happy. But since we can’t guarantee that – and in fact, we don’t have the data yet to suggest otherwise – we are actively building our capacity,” he said.

Lt. General Todd T. Semonite, chief of engineers said the advanced infrastructure of the world’s largest convention centre allowed it to perform like a hospital.

“The ability to do negative pressure in a hotel room is pretty easy,” he said.

“But when you go into a giant voluminous room like a convention centre, to try and bring the pressure down, we didn’t think it was attainable, [but] McCormick Place’s infrastructure—with water, electricity and sewage service easily accessible—makes it possible to set up a medical facility there.”

The McCormick Place centre is expected to be operated in conjunction with the Federal Emergency Management Agency (FEMA) and medical volunteers are being sought to work at the venue.

The venue is host to many major medical conferences including gastroenterology Digestive Disease Week (2-5 May), the American Diabetes Association’s 80th Scientific Sessions (12-16 June)  and the respiratory specialists meeting CHEST 2020 (17-21 October).

ASCO says it intends to deliver some of the scientific content of its cancelled McCormick Place meeting as a virtual meeting.