Venetoclax gets PBS listing for CLL 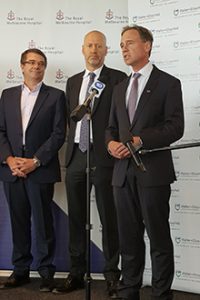 Clinicians from the research institute that helped discover venetoclax (Venclexta) have welcomed its listing on the PBS for people with relapsed or refractory chronic lymphocytic leukaemia (CLL).

From 1 March 2019, venetoclax will be subsidised in combination with rituximab for the treatment of certain patients with relapsed or refractory chronic lymphocytic leukaemia who have received at least one prior CLL therapy.

“New medicines like [venetoclax] don’t happen by accident. They are the result of careful laboratory and clinical research over many years. The idea behind venetoclax arose from a basic research discovery in Melbourne 30 years ago,” he said at the announcement of the listing at WEHI.

“Collaboration has been central to the successful development of this drug, with Australian scientists and clinical researchers playing prominent roles in taking the initial discovery all the way from the lab into this new treatment for patients.”

Venetoclax is a selective inhibitor of the B-cell leukaemia 2 (Bcl-2) protein which is an anti-apoptotic protein. Overexpression of Bcl-2 has been demonstrated in CLL cells, mediating tumour cell survival and has been associated with chemotherapeutic resistance.

It is expected 420 CLL patients a year will benefit from the listing, without which they would have to pay around $7,000 per script or $165,000 per course of treatment over a two year period.

“The reimbursement of [venetoclax]  … marks a major milestone in the clinical development journey that included the first patients in the world receiving this agent on clinical trials in Melbourne in 2011. It is extremely gratifying that this therapy is now available to patients with CLL nationally,”  he said

Venetoclax was developed as part of a research collaboration between WEHI and AbbVie, Genentech, a member of the Roche Group of Companies. WEHI received

In 2017, WEHI made a landmark deal worth up to US$325 million from the partial sale of royalty rights for venetoclax, with funds used to  help set up a Drug Discovery Centre  at the institute from June 2019.