The challenge to treat kids as kids 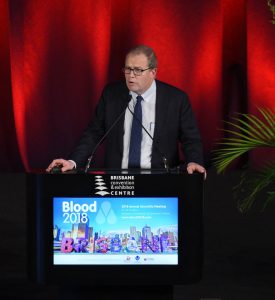 Children are different in every way from adults – including haemostasis – yet too much of their management is based on evidence extrapolated from adult data.

He told delegates at Blood 2018 in Brisbane that children and adults had numerical and structural differences in proteins such as fibrinogen, different mechanisms for the activation of platelets, and different and age-related responses to aspirin.

In addition to coagulation protein differences, there were about 100 other plasma proteins that were differentially expressed in infants, childhood, adolescence and in adults.

“We need to understand this better so we can target treatments better,” Professor Monagle said.

He said treatment of adults was largely directed at trying to fix a problem while in paediatrics it was ‘to unlock the potential of the child’ for many decades.

Therefore the risk versus benefit equation for any particular treatment was different in children and had to consider the potential for long-term adverse effects.

Professor Monagle from the University of Melbourne and Royal Children’s Hospital, asked colleagues to ensure that treatments delivered during childhood did not lead to future disease in adults.

He told the limbic there was room to improve the care of children.

“For most of the therapeutic interventions we do, we have very little knowledge about their long-term impact. We have data for example on children with congenital heart disease that says these children have long-term neuropsychological deficits but is it because of the underlying heart disease, or the cardiac surgery, or during their bypass they had microemboli, or because of the heparin or other drugs I give them that changes their brain metabolism at a crucial point in the development?”

“We know a lot of the proteins involved in the clotting system are also involved in normal growth and development of the brain. At the moment, all of the studies we do around treatment and interventions, are based around immediate bleeding and clotting outcomes without any consideration of what might be having a long term impact on neurodevelopment.”

The survivors of childhood diseases were becoming a larger subset of the adult population.

“If we don’t have a good understanding of how our management in childhood is going to impact on their adult trajectory we have the potential for a huge reservoir of adults who are all going to develop early osteoporosis or early dementia or whatever because we haven’t actually paid attention to those things.”

He said there were no simple fixes to the problem beyond recognising that children were different to adults and that methodologies such as randomised controlled trials (RCT) and meta-analyses, may not be the only methodologies required for introducing new treatments to children.

“Because we are not just interested in the short term effects but we are interested in those long term effects, the role of registries and long term cohort studies is going to become a lot more important in paediatric studies, and I think we need to expand a lot of studies so we are looking for off target effects rather than just focusing on the expected effects of the primary disease and the treatments that we are using.”

“For example, with all the new DOAC trials that are coming out, I would much rather see a little bit less of the RCT and more resources invested into long term cohort studies of children who are exposed to the drugs to try to understand if we are having any negative impact on them down the track.”