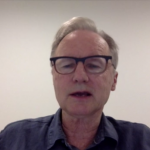 Professor Timothy Hughes, Precision Medicine Theme Leader at the South Australian Health and Medical Research Institute (SAHMRI) presented new results at EHA25 Virtual from a phase 1 study of asciminib showing that it was well tolerated and produced deep responses in patients who have been heavily pre-treated with at least two and often three TKIs.

In a subset of 48 patients did not have a T3151 mutation and with baseline BCR-ABL1 of <1%, more than 75% of the patients were in MMR (major molecular response) and 88% remained on therapy for more than three years (median follow up of 167 weeks).

The study also showed that deep molecular responses of MR4 and MR4.5 had been achieved by around 50% of patients who were not in those deep responses at baseline.

Furthermore only three (6%) patients had withdrawn due to adverse events, with the most common serious adverse events being pancreatitis (8%), elevated lipase and amylase and hypertension.

Professor Hughes said it was notable that while second and third generation TKIs were associated with high rates of vascular events, this did not seem to be an issue with asciminib. While 10% had some kind of occlusive event, half were not deemed to be causal and may have been due to prior exposure to TKIs.

“Asciminib is an exciting new drug – it’s a TKI but quite unique in the way that it works. It’s allosteric inhibitor of BCR-ABL1 that specifically targets the myristoyl binding pocket (STAMP Inhibitor),” explained Professor Hughes.

“Because of its specificity and because it doesn’t bind to other kinases, asciminib minimises off target activity leading to high potency and reduced toxicity compared to other approved CML therapies,” he added.

Professor Hughes said it was exciting to see a cumulative incidence of major molecular response of 77% at more three years of follow up, and it seems to be improving further over time.

“I think this is a remarkably good response in this challenging group of patients who have intolerance to several other TKIs, he said.

Of 24 patents who were not in MMR at baseline, 18 achieved MMR and 15 had maintained that for more than two years.

And among patients who were not in MR 4 or MR4.5 at baseline and who achieved it, the majority (56%) maintained those targets for more than two years.

Professor Hughes concluded that the results supported further investigation of ascimnib in patients who do not achieve an optimal response at earlier time points to other TKIs.