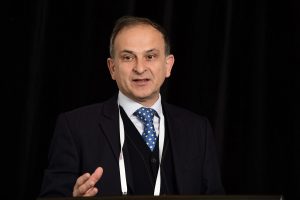 The durability of gene transfer for severe haemophilia A is looking encouraging with results now in on the three-year follow-up of patients who received a single dose of valoctocogene roxaparvovec.

Now the three-year follow-up, presented in a late-breaking ISTH session, had shown clinical evidence of a persistent effect and all patients were off routine prophylaxis.

Factor VIII activity levels had plateaued in years 2-3 at about 40% which had exceeded original expectations of about 5%.

“This plateau gives us significant optimism for the future – that this effect is going to last. Overall, there is a real feel that this is a durable treatment.”

He said the persistence of stable, circularised DNA in long-lived peripheral blood mononuclear cells supported the promise of long-term expression of factor VIII.

Patients had reported improvements in quality of life across all domains – the consequences of bleeding, emotional impact, physical functioning, role functioning, treatment concern and worry.

And there was a favourable and consistent safety profile with no patients having thrombotic events or developing factor VIII inhibitors.

He said haemophilia A was the ideal disorder for gene therapy in that it did not take much factor VIII to make a huge difference to patients and it was also very easy to assess efficacy.

Questions remain about the interactions of gene therapy and factor VIII inhibitors.

A phase 3 study is underway.

The study of 34 patients with haemophilia A or B, with or without inhibitors, has followed participants for up to 36 months since starting monthly subcutaneous injections of fitusiran.

“We found a steady and predictable reduction in antithrombin levels and thrombin generation increasing into the lower end of the normal range for healthy volunteers.”

“Clinically, the annualised bleeding rate overall is 1.08 indicating low rates of bleeding over a considerable period of observation.”

He said the advantages of the treatment included its fixed dosing, once a month subcutaneous administration, and a formulation that does not require reconstitution and was stable at room temperature.

The presentation was recognised as one of the clinical highlights of the Congress program.