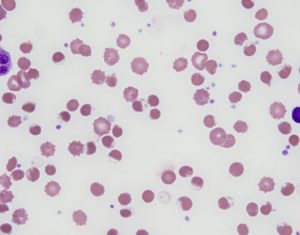 They warn against the use of unproven high-dose vitamin C in a case report of a cancer patient with glucose-6-phosphate dehydrogenase (G6PD) deficiency who had near-fatal reaction and required lengthy haemodialysis.

Published in the MJA, the clinicians describe the case of a 54 year old man undergoing treatment for metastatic prostate cancer who sought concurrent treatment at an integrative health clinic.

Pre-therapy tests at the clinic revealed he had G6PD deficiency but he nevertheless was started on  a course of intravenous vitamin C (30g) along with glutathione, zinc, methylcobalamin and magnesium.

Two days later the patient became unwell with syncope and profound fatigue but his complementary therapy was continued with a further 60g of vitamin C.

When he presented to hospital the following day after further episodes of syncope he was found to have severe oxidative haemolysis with pathognomonic red cell changes on peripheral blood film (bite cells, spherocytes, polychromasia). The patient also had unconjugated hyperbilirubinaemia, undetectable haptoglobin, elevated lactate dehydrogenase, reticulocytosis, a negative direct antiglobulin test and a positive urinary haemosiderin.

He was given multiple blood transfusions but developed acute renal failure that required urgent haemodialysis. He recovered after receiving red cell transfusion for eight days and haemodialysis for ten days, and was discharged after 21 days.

Dr Matthew Rees and colleagues at the Peter Mac said the case highlighted the risks of complementary therapies that are widely used  – but not always declared to their treating physician – by people with cancer.

They note that the Mediterranean variant of G6PD deficiency was the most common and could predispose some affected people – especially males  – to severe haemolytic anaemia when exposed to oxidative stress via certain medications or foods such as fava beans.

“Awareness of this ethnic predisposition is important and it is advisable to screen asymptomatic at-risk individuals before the administration of certain medications,” they write.

They note that there have been at least four other reported cases of acute haemolysis triggered by vitamin C in patients with G6PD deficiency, one of which was fatal.

“Clinicians have a duty of care to dissuade patients from seeking complementary therapies with potential harms and lack of proven benefit,” they warn.