Closing in on better interferon-based treatments for MPN 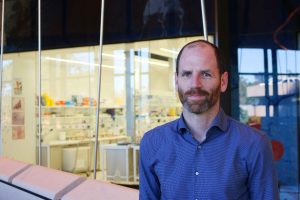 Combination treatment with ruxolitinib and pegylated interferon-alpha may be an effective treatment in myeloproliferative neoplasms (MPNs) , experimental work at the QIMR Berghofer Medical Research Institute research has suggested.

Published in Leukemia, the results from a murine model confirmed the drugs target two different pathways in MPN.

Senior co-author and haematologist Associate Professor Steven Lane told the limbic it has been known for a couple of years that interferon works on normal stem cells by awakening them from a dormant state.

“And what we and other people have previously shown is that the same effects are present in blood cancers as well,” he said.

“But what we showed in this paper is when you have a long-acting version of interferon, it is much more specific for the blood cancer cells than the normal cells and because of that, these cells are depleted or removed from the system over time. And that allows that therapeutic  response which we see in patients.”

He said they also showed that JAK inhibitors such as ruxolitinib do not target the stem cells that cause disease such as polycythaemia vera.

“And in some ways that is an advantage because potentially, these drugs can be combined to get more effective responses.”

Associate Professor Lane, head of the cancer program at QIMR Berghofer, said the ongoing research was now trying to determine why some people don’t respond to the drugs.

“We think that other genetic changes in these blood cancers are probably responsible for that. So if we can work out exactly what that is then, again, it helps us to design better combinations that will specifically get rid of those cells.”

He said the research may have application in other diseases particularly AML which was closely related to and can arise from MPNs.

“We really don’t have good treatments for MPN or AML,” he said.

“We know that these drugs can be used in patients to enhance their immunity after transplantation…but that’s through a different mechanism of action.”

He said while Pegasys was available and PBS listed for these patients, the ultra-long acting interferon had much more specific effects on the cancer stem cells. Their fortnightly administration seemed to be more effective than weekly injections of the currently available interferon.

“So basically when patients are treated for a long period of time, the amount of the blood cancer is gradually reduced over time.”

“Interestingly, the long acting interferons do have fewer toxicities than the short acting versions as well. So they have enhanced activity but also less toxicity.

“The new ultra-long acting versions are available in Europe and we are hoping to bring some of those studies to Australia… these are small developments but each generation of drug is actually more successful and better tolerated than the previous generation of drug so we would like to have these here in Australia to use.”