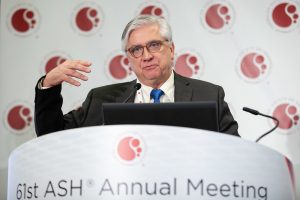 A fully humanised bispecific antibody is showing promise as a treatment for relapsed/refractory B-cell lymphoma, including in patients who have received prior CAR T-cell therapy.

Speaking at ASH 2019 in a plenary scientific session for selected presentations likely to be practice changing, Professor Stephen Schuster presented interim results from a phase 1/1b study of mosunetuzumab.

Mosunetuzumab binds to both CD3 on T cells and CD20 on B cells. In engaging and activating the T cells, it directs their cytotoxicity against B cells thereby causing the death of the target cells.

The international schedule-optimising and dose-finding study in 270 patients from 42 sites across seven countries including Australia, has found responses from the lowest doses.

Professor Schuster, director of the lymphoma program at Penn Medicine, said in patients with the most aggressive lymphomas – mostly DLBCL and transformed follicular lymphoma – the overall response rate was 37% and the complete response rate was 20%.

Similar response rates were seen in a sub-group of 30 patients who had prior CAR T-cell cell therapy – an overall response of 39% and CR of 22%.

He said it was not surprising that patients with the more indolent follicular lymphomas did better with an overall response rate of 63% and CR of 43%.

CRS was observed in 29% of patients and in 27% of those who had prior CAR T-cell therapy.

Neurological adverse events were mostly headache, insomnia and dizziness and occurred at similar rates in both CAR T-cell naive and treated patients.

ICANS-like neurological adverse events were rare (1.1%) in the  CAR T-cell naive patients and not seen in patients who had prior CAR T-cell therapy.

Professor Schuster said CAR T-cells have been a major therapeutic advance for patients with refractory B cell malignancies and were successful in about one third of patients.

“However the two-thirds of patients that don’t respond to CAR T-cell therapy are now our new unmet need.”

And there was an advantage in being able to offer patients an off-the-shelf product, he added.

“One of the problems with the CAR T-cell approach is that it takes three weeks to make the cells, two weeks to get insurance approval, a week to schedule apheresis …  a month or two months doesn’t sound long but it is an eternity in a fast-paced disease.”

He added mosunetuzumab was not an ongoing therapy.

“This is a therapy patients receive until they are in remission then it is discontinued and three quarters of patients in CR in this study remain in CR off therapy and are being followed.”

“As a single agent, mosunetuzumab has a really promising efficacy and acceptable risks. It may be a simple way to enhance the CAR T-cell approach,” he said.

Professor Schuster said it could be used as a bridge to CAR T-cell therapy or in patients who have had CAR-T cell therapy and had not responded.

There was also some evidence that it could be used as a retreatment, he said.