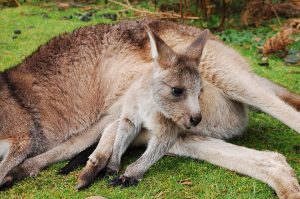 Faecal microbiota transplantation may have only recently been accepted into mainstream medicine but its origins can be traced back to a traditional treatment for sick joeys in remote Australia.

In a letter published in Gut, Eliza Jane Temple Milliken from the Department of Infectious Diseases and Microbiology at St Vincent’s Hospital, Sydney, says faecal microbiota transplantation (FMT) was being used by wildlife carers in the Central Australian Desert to treat sick Joey kangaroos as early as the 1960s.

Former Remote Area nurse Cynthia Lynch, who manages a wildlife hospital in Alice Springs, had been taught by farmers in Cape York to use FMT to treat kangaroo joeys who presented with life threatening dysentery secondary to lactose exposure.

Around 3-4 crushed and strained pellets from healthy roos added to bottles of lactose free milk and fed to the unwell Joeys four times a day usually resulted in formed stool within 24-48 hours.  The method, as estimated by Cynthia, had been used around 20 times a year and 1,000 times over the past 50 years.

Steve Irwin’s Australia Zoo has used ‘macropod poo-shakes’ from faeces directly extracted from deceased parent donors for the past 10–20 years with reportedly similar successes, she notes.

“Joeys are often in extremis on admission after spending several days with hunters’ families being fed indigestible bovine milk. Cynthia’s decades of work caring for humans and wildlife in very remote areas of Australia are to be commended,” Ms Milliken writes.

“Her work in wildlife care with techniques considered a recent discovery stand as a reminder of the wisdom to be found within connection to place and country”.