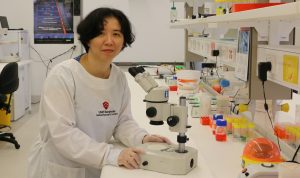 A panel of serum glycoprotein biomarkers can discriminate between patients with Barrett’s oesophagus who do not require further intervention and those who have progressed to oesophageal adenocarcinoma.

The research, led by a team at QIMR Berghofer Medical Research Institute, holds the promise of a screening test to detect oesophageal adenocarcinoma at the earliest opportunity.

It would also be more cost-effective and less invasive than current endoscopy surveillance of patients with Barrett’s.

The study tested 301 blood samples from patients in Australian and US cohorts with either Barrett’s, early-stage cancer, or more advanced oesophageal adenocarcinoma.

“The addition of four more biomarker candidates to the panel increased the AUROC to 0.93,” the study said.

Associate Professor Michelle Hill, head of the Precision and Systems Biomedicine Laboratory at QIMR Berghofer, said monitoring blood levels of the proteins could provide an accurate indication of the presence of oesophageal cancer.

“Importantly, the marker levels start to change when Barrett’s oesophagus – a precursor condition to oesophageal cancer – starts to turn into cancer. These promising results suggest that the markers can accurately detect the cancer from an early stage.”

Further prospective studies were warranted, prior to development of a first-line surveillance blood test.