Have you seen the Stolen Colon? 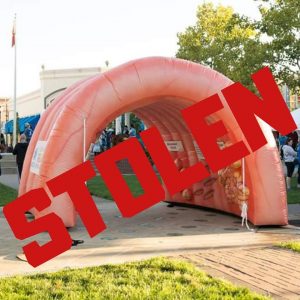 If someone offers to sell you a colon or you see one for sale on ebay, the police would like to hear from you about stolen property.

The theft in question relates to a giant inflatable colon used for educational purposes by the University of Kansas Cancer Center.

The colon, valued at US$4,000, was stolen from a truck that was parked in Kansas City, causing great dismay among clinicians at the centre

“Colon cancer is a tough subject for many to talk about and the giant, 150 pound, ten foot long inflatable colon is a great conversation starter,” says Dr John Ashcraft, surgical oncologist and co-leader of the cancer prevention and survivorship research program.

However the cancer centre is trying to see the positive side to the theft, since it has created a large amount of publicity around gut health.

“A lot of people are talking about it,” says events coordinator Stacie Moody.

They have put out social media alerts under the hashtag #stolencolon asking the public to call Kansas City Police with any information.

She believes whoever took the colon had no idea what it was and once they found out, they probably dumped it somewhere.

“There’s probably not much of a black market for a giant inflatable colon,” she says.

But with little prospect of recovery the Coalition is also aiming to raise US$4,000 to replace the colon.

Anyone interested in donating can go online to coloncancercoalition.org/stolencolon.