A ‘snapshot’ of H. pylori incidence in Australia based on urea breath test (UBT) positive results has revealed unusual patterns of infection, including a predominance in younger people.

Researchers from the University of WA analysed findings from 95,713 UBT results obtained from WA pathology labs for people presenting with gastric symptoms between 2010-15.

The overall incidence of H. pylori  infection was 107.63 per 100,00 individuals per year, but with the numbers of positive tests being a hundred fold higher for people with postcodes of Dianella and Bayswater  (300-400) compared to those people from postcodes of Gidgegannup, Wattleup and North Coogee (less than 4 tests).

Demographic data also showed that H. pylori was not mainly found in older people, as has previously been believed, and that the onset of H. pylori -related disease occurs earlier than previously thought. 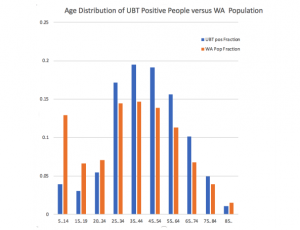 Rates of H. pylori positivity were particularly high among Indigenous Australians, and were also found to be higher in people born overseas than people born in Australia.

There also appeared to be a higher positivity rate for females compared to males, but this was likely because women were over-represented (59%) in the numbers of people having UBT  compared to males.

Using repeat UBT as a marker of treatment failure, the researchers said the results suggested that first line triple therapy was effective (82.9%). When they looked at subsequent tests, the data suggested that 94% of patients were cured of H. pylori infection by the first line or follow-up treatments.

Other trends suggested by the data included first-line treatment failing significantly more often for H. pylori  infection in women than in men, but men presenting with symptoms 18 months earlier than women.

The study authors said their ‘snapshot’ had lessons for how and where to target test and treat approaches for H. pylori eradication.

“H. pylori infection is largely seen as a solved problem. However, we were able to find groups within the community who are disproportionately affected by  H. pylori -related disease, notably Aboriginal Australians and migrants to Australia. There are also some individuals in whom the infection is particularly refractory,” they concluded.

The study is published in the Journal of Clinical Medicine.