The Register will recognise and profile GESA members providing their skills and services in areas of disadvantage both in Australia and overseas.

It also provides an opportunity for colleagues to consider donating their time, skills or financial support to existing or new projects.

“It will also act as valuable resource to share with government and other stakeholders to ensure the enormous contribution of the gastroenterology and hepatology profession is fully appreciated,” she said. 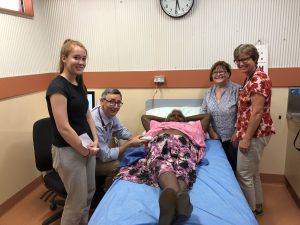 “We were presented with an opportunity and felt this was important work. We have the skills and can take them remotely and offer the same sort of service that people would get here in Adelaide, in the big smoke.”

“Certainly there are cases of hepatitis C that we’ve been able to see and commence on treatment that probably would never have come to attention otherwise because they wouldn’t have been able to access the specialists.”

“So it’s really about increasing access for those patients – particularly those with hepatitis C and hepatitis B – to be able to identify patients that need treatment and treatment that will certainly reduce their chance of liver failure and liver cancer.”

“We think it’s enabling early intervention and it’s also directing many of those local Aboriginal health workers to this problem, and the need to look for it and monitor it.”

While he admitted to some ‘culture shock’ at the standard of living and standard of health in remote Aboriginal communities, there was also enormous satisfaction in doing something different.

“And although it’s tough, ultimately it is very rewarding to go somewhere and do some good. It’s a great feeling and a great experience.”

Meanwhile the Australian & New Zealand Gastroenterology International Training Association (ANZGITA) has been running skills transfer projects over many years in countries including Fiji, Timor-Leste, Myanmar, the Solomon Islands and Samoa.

Founding chair of ANZGITA Professor Finlay Macrae told the limbic he was inspired to continue seeking new clinical experiences after an elective in PNG as a young medical student.

“That opportunity came when a surgical colleague said I should go to Suva, which I did for 10 to 15 years, and then met an academic Professor Rob Moulds who said you can be much more effective if you teach, compared to providing a service. Your impact will be much greater if you can transfer the skills.”

He said ANZGITA was about capacity building rather than service delivery.

“Ten years ago that was a little unusual in the medical philanthropic world.”

Some of the principles which ANZGITA still operates on – delivering in country, being responsive to local needs and incorporating gastroenterology nurses – meant many countries were keen to partner with them.

“Universally, the people who join the ANZGITA teams come back feeling they have learnt more than they have contributed. They just learn so much from the way medicine is practiced in those environments without all the trappings that we have in the West to support us. I think we all come back in awe, not only seeing the diversity of conditions, but the way they are managed.”

He said the register provided an opportunity for connecting like-minded people.

“I think that the issue for many people who would like to get involved is they don’t know how. They don’t know where to go. They don’t know the steps that need to be taken to engage. I would say that undoubtedly it is much more effective to be engaged within a team than to try and do it in isolation.”

He encouraged anybody who has the capacity to contribute.