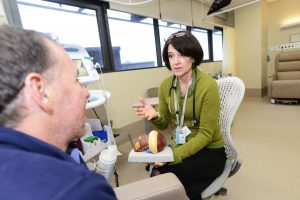 The number of people being admitted to hospitals with chronic liver disease is increasing, indicating a potential failure in public health that will translate into increased healthcare costs.

The research, published in the journal EClinical Medicine, showed the absolute number of admissions increased 1.6-fold from 2,701 admissions in 2008 to 4,367 in 2016.

The overall fatality rate from cirrhosis-related admissions was 9.7% for males and 9.3% for females.

Lead researcher and Princess Alexandra Hospital hepatologist Professor Elizabeth Powell, told the limbic it was concerning to see the rates of admission increasing despite all the public health efforts around alcohol and treatment of viral hepatitis.

She said alcohol was still a major issue – involved in over half the admissions (55.1%).

“Most people with alcohol-related liver disease haven’t seen their drinking as a problem because their colleagues or friends drink to excess and people measure their alcohol intake according to what is socially acceptable when in fact it’s a problem.”

“This really needs to be addressed – that we increase awareness of chronic liver disease and also increase messages to the general population, GPs and government about the need for more attention to safe drinking and treatment of viral hepatitis and management of obesity and type 2 diabetes because if we can prevent progression of liver disease we will prevent a lot of these admissions and complications.”

She said NAFLD at 4.9% of admissions was probably underrecognised in the study.

“There was quite a substantial number of patients given a diagnosis of cryptogenic or unknown cause of cirrhosis and that number has been increasing as well. I think many of those patients probably have undiagnosed NAFLD and it goes hand-in-hand with the increasing prevalence of diabetes as a comorbid factor in theses patients.”

“Just because the number with a diagnosis in this study was very small, that doesn’t mean it’s not a significant issue and an increasing cause of disease.”

She said globally about 25% of people are reported to have NAFLD.

Professor Powell said another concern was the high rate of patients with liver cancer (14.6%).

“Liver cancer is an increasing problem in Australia – the most rapidly rising cause of cancer deaths – and the majority arise in patients with cirrhosis, so if we can prevent the development of cirrhosis we can prevent this very serious cancer.”

She said chronic liver disease was underresourced and underrecognised.

“This is the first publication on rates of admission in Australia, and even though it is in Queensland, I think it is likely to be very representative of what is going on in the rest of Australia and in fact in when we compare it to other countries it is very similar.”

“One of the reasons for this publication is to raise awareness with health department so we can identify this and put specific plans for prevention in place to try to reduce the burden of liver disease on hospitals, health carers and healthcare resources.”