An unexpected step in the fight against gastric cancer

Around 2,000 Australians – mainly men – are diagnosed with stomach, or gastric, cancer every year.

Usually the symptoms are hard to pick up until it’s too late, making what is a relatively common cancer also an often fatal one. In 2015, 1150 Australians died of stomach cancer. It’s the fifth most common cancer worldwide, and the third most deadly.

Survival rates are low, and the main treatments are drastic – surgery to remove all or part of the stomach, usually followed by chemotherapy and radiotherapy.

But a chance discovery by researchers who were looking into a completely different disease shows promise for new treatments similar to those already used to treat melanoma and lung cancer, including immunotherapy. It might also even lead to preventative treatments.

Walter and Eliza Hall Institute of Medical Research and University of Melbourne researcher Dr Lorraine O’Reilly was working on the autoimmune disease lupus when she noticed some mice started to develop stomach tumours at around 12 to 18 months of age. 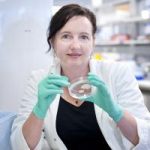 “When I consulted our pathologist, Professor Paul Waring from the University of Melbourne, he didn’t believe me at first,” remembers Dr O’Reilly. “However, after reviewing the slides he sent me an enthusiastic email that afternoon asking to be involved in the project.”

These weren’t normal mice – they had been purposely bred without the gene NF-KB1. When the molecular immunologist and her colleague Dr Tracy Putoczki investigated further, they discovered that removing this gene actually caused spontaneous development of malignant stomach cancer, driven by chronic inflammation.

Their findings are published in the journal Immunity.

“This was the first time we’ve seen spontaneous invasive stomach cancer in mouse models, but the amazing thing was that NF-KB1 gene knock-out models have been around for 20 years without anyone realising this,” says Dr O’Reilly, whose career has now taken a surprising turn from autoimmune research to working on new cancer therapies.

“Interestingly, we saw the cancer develop in an equivalent time frame to what you would see in humans, that is between 50 and 70 years.

“Of course, after this initial discovery, we tweaked the model to improve its use as a preclinical model for testing therapies, making it truly unique.”

The finding was particularly surprising because NF-KB1 belongs to a family of proteins otherwise known to drive cancer development, not prevent it, making NF-KB1 the ‘odd one out’.

It is well established that, while in humans stomach cancer can take decades to present, the inflammation – or gastritis – that causes it appears much earlier. This inflammation can be induced in various ways, including infection with the bacteria H.pylori or Epstein-Barr Virus, or even a high salt diet. More recently a genetic link to abnormalities in the NF-KB1 gene have been documented in some gastric cancer patients.

“Inflammatory cells produce proteins called cytokines, which will cause cells to grow and divide more rapidly. Over a long period of time, this often leads to DNA damage and mutations, which is how most inflammation-induced cancers, like colon cancer and stomach cancer, develop,” Dr O’Reilly explains. 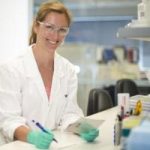 It took six years from their initial discovery for Dr O’Reilly and Dr Putoczki to work out exactly how loss of NF-KB1 caused cancer development.

“Because the sequence of events leading from chronic inflammation to gastric cancer in our models is so similar to how it develops in humans, we have been able to get a better understanding of how the disease develops and new insights into potential treatments,” explains Dr O’Reilly.

Dr O’Reilly and her colleagues found signs of inflammation at the molecular level long before the tumours emerged in the ‘NF-KB1 knockout’ mice. These signs included high levels of proteins like cytokines and so-called STATS (Signal Transducer and Activators of Transcription), in particular STAT1.

They are now investigating inhibiting different STATS as a way to “dampen down” this early inflammation to prevent tumours forming in the first place.

“We have now shown that loss of STAT1 is a very promising in preventing inflammation associated with gastric cancer development. Currently there are no really good STAT1 inhibitors for human therapy but if this works out it might be an impetus for drug developers,” she says.

They also discovered that a protein called PD-L1 is expressed or activated in certain immune cells long before the cancer appears. PD-L1 sends a signal that prevents infection fighting T-cells from responding to a tumour. Existing immunotherapies used for lung and skin cancers block these signals to allow the T cells to kill the tumour.

“But because we have been able to understand more about the genetics of this disease, we have identified a range of other potentially good candidates for new therapies that could expedite clinical trials of treatments for gastric cancer patients.”

Dr O’Reilly and her colleagues are now looking into exactly which combinations of drugs will offer effective treatments for stomach cancer.

Their work is part of a body of early research into immunotherapy treatments for stomach cancer. Some clinical trials are already happening at the neighbouring Victorian Comprehensive Cancer Centre, also based in Melbourne’s Parkville biomedical precinct.

“We probably shouldn’t assume that immunotherapy will work in all cases of stomach cancer,” she cautions.

“However additional therapies, such as the ones indicated by our studies, could increase the likelihood of success, so we are really excited about the possibilities and the great promise for a cancer that is sadly all too common, and still far too deadly.”