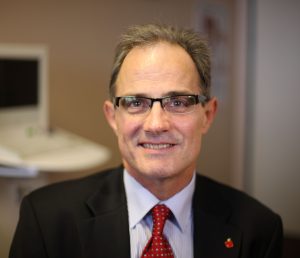 Gastroenterologist Dr Cameron Bell, a member of the Guidelines Working Party Management Committee, told the limbic the evidence has moved on since 2011.

“So in the 2011 guideline, the only statement that was made was there wasn’t sufficient evidence to give differential advice about SSA follow-up over and above adenoma follow-up. Now there are quite detailed sections on patients who have serrated adenomas by themselves or serrated adenomas and adenomas.”

“Instead of five years it is 5 to 10 years, bearing in mind that there is good evidence that those people are actually not at above average risk of developing bowel cancer.”

“If you have one or two polyps that are adenomas only i.e. no villous change, no high-grade dysplasia, then consideration should be given to extending that interval to 10 years.”

“And in fact there is a view, a minority view, that those people should just go back to FOB testing because that is what the general population at average risk do.”

“The 2011 guidelines were really related to the next colonoscopy but these ones, have put in the third and fourth colonoscopies.”

Dr Bell said there were fewer significant changes in the sections on surveillance following bowel cancer resection and dysplasia in IBD.

He added the draft guidelines were ‘as evidence based as we can make them’ given in part the technological advances since studies with sufficient follow-up were performed.

“And we’re talking about an era where it was only just starting to emerge that we need to scope more carefully. There is this big issue of missed lesions or right colon colonoscopy being nowhere near 100% effective in preventing future bowel cancer.”

“So there are technical advances with the scoping, visualisation and image characterization and we should be scoping more carefully, slowly and with a better withdrawal technique than we did say 15-20 years ago.”

“There are some colonoscopists who ignore guidelines and bring people with low risk findings back at three years and there is just no excuse for doing that.”

“The two big things we could do to reduce deaths from bowel cancer would be to miss fewer lesions by scoping better and to stick to surveillance guideline recommendations,” Dr Bell said.

The draft guidelines are open for public consultation until May 2.