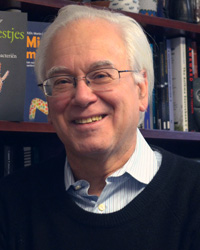 The depletion of the microbiota that we evolved with is evidence that humans are staring down the barrel of a microbiome apocalypse.

AGW 2019 Bushell Lecturer Professor Martin Blaser said we’re already getting some insight into the physiological changes to be expected when co-evolved organisms disappear.

“Rates are lower but going in the same direction in developing countries but with a lag of about 30 years,” he said.

He said the adult gut microbiome was typically established by about age three – something that was threatened by changes in birthing, infant feeding and child rearing practices.

Vaginal deliveries, breastfeeding and skin-to-skin contact between mother and infant were critical to the early establishment of a normal flora.

“Changes in human ecology have altered the transfer and maintenance of ancestral microbes. We are seeing the cumulative depletion of microbiota generation after generation.”

Professor Blaser, director of the Center for Advanced Biotechnology and Medicine at Rutgers Biomedical and Health Sciences, told delegates that antibiotics were one of the greatest discoveries of the 20th century.

However children in the US were typically exposed to almost three courses of antibiotics in their first two years of life and about 11 courses by age 10.

“Antibiotic use in the first two years of life is exploding in developing countries.”

As evidence that antibiotics were definitely overused, he said there was three-fold variation in use across European countries but without a corresponding difference in patterns of illness.

And while most of the “fuss” was about antibiotic resistance, he said that was “only the tip of the iceberg” considering the degree of disruption to the human microbiome.

“Perturbing the microbiome during the critical early stage of life has long term consequences,” he said.

And those consequences were cumulative across generations, he said.

Speaking in a later session at the conference, Professor Blaser controversially challenged Australians to consider whether extermination of H. pylori was justified.

He said despite its Noel Prize-winning association with gastritis and ulcers, H. pylori actually has many of the characteristics of a commensal organism.

H. pylori has been present in humans for at least 100,0000 years, and probably much longer in our ancestors, was acquired early in life and persists throughout life.

Studies have shown that as human populations diverged out of Africa, H. pylori has also diverged.

“This organism, that has been present in the human for at least 100,000 years, is nearly extinct in developed populations,” he sad.

Professor Blaser said the start of the demise of H. pylori appears to have preceded antibiotics and may in fact be related to water chlorination.

However medicine had been complicit in clearly establishing it as a pathogen.

He said the evidence instead suggested a complex biology and biphasic relationship in which H. pylori had late in life costs related to gastric cancer but perhaps had early life benefits.

For example, H. pylori played a role in immunological programming, which may protect children from diseases such as asthma and allergy.

“The H. pylori colonised stomach is immunologically active and importantly the cytokines and genes related to immunological response are present differentially in helicobacter positive versus helicobacter negative individuals.”

“This is good news, it’s a terrible disease. But other diseases are rising like adenocarcinoma of the oesophagus. The trends are ominous.”

He said based on current trends, H. pylori will continue to disappear if left to its own devices and modern treatment unless we do something different.

“Flora is not random but there has been selection and we need to think about H.pylori in biological ways rather than in terms of symptoms and hyperbole.”

“The loss of the microbiome is dismal and we are really heading for trouble. The earlier we understand that, the sooner we can being to turn it around because otherwise we are headed over a cliff where we have lost our ancestral organisms at a rapid rate.”

“In just a few generations our biodiversity has gone down by 50%. I think it is like climate change except it is faster,” he told the limbic.