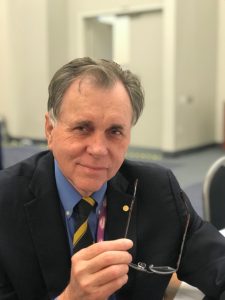 Nobel laureate Prof Barry Marshall’s latest project is aiming to revolutionise the diagnosis of IBS by using tiny microphones to listen for the characteristic gastrointestinal sounds of the bowel disorder.

In a radical move aimed at tackling widespread over investigation of IBS, Professor Marshall is backing a novel diagnostic approach based on microphones the size of a 20c piece, which are currently used by pest controllers to listen for the faint gnawing sounds of household termites in wood.

Speaking at the DDW 2018 meeting in Washington DC, Prof Marshall said gastroenterologists were accustomed to listening to gut sounds for a few seconds, but the new approach using an array of four microphones worn on a belt could be used routinely to listen for three or four hours to detect the signature acoustic profile of IBS in the bowel.

Results from a proof-of-concept study presented at the DDW meeting showed the microphones could identify IBS with about 87% accuracy, which if confirmed in further trials would open up a new pathway to managing the condition without expensive or invasive investigations such as CT scans and colonoscopy.

“Specialist gastroenterologists like me see a lot of patients with IBS. I have people coming up to me in Bunnings asking me about it,” he told the limbic.

“The current approach is a diagnosis of exclusion. Investigations such as CT scans and tests for parasites costs an average of $5000 per patient – equivalent to hundreds of millions of dollars a year – and nothing really works. So our thinking was that if we could detect IBS with a simple non-invasive test the savings would be immense,” he said.

Prof Marshall said he had always had an interest in technology and electronics, so it was no surprise that he took an interest in developments in sensing technology by acoustic engineers at Edith Cowan University in Perth.

In a preliminary study, he and co-researchers adapted the small microphones into an acoustic belt that detected sounds from the abdomen of 31 IBS patients and 37 healthy controls. The acoustic data was then analysed by machine learning techniques to identify the complex gurgling and squeezing sounds of IBS.

In a further validation study in 15 patients with IBS and 15 healthy subjects, the acoustic belt proved to have 87% sensitivity and specificity for IBS diagnosis.

The next step is to develop more advanced prototype acoustic belts that can be tested more widely in humans, said one of Prof Marshall’s co-researchers, Dr Josephine Muir (PhD) associate director of the Marshall Centre at the University of WA.

“This study allowed us to achieve proof of concept. Once we further develop the belt and test it on more patients, this tool will be intended for use in primary care settings for the diagnosis of IBS,” she said.

Professor Marshall added that the sensitive microphone array would have the advantage of being able to pinpoint the exact location of problems in the gut by using geo-location technology.

This would give gastroenterologists detailed information to allow them to assign patients to different spectrums of disease and tailor and modes of therapy accordingly, he said.