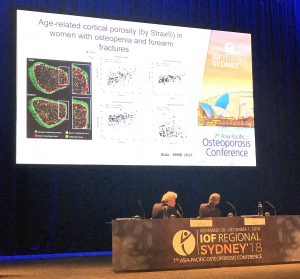 Prediction of bone fracture risk can be greatly improved with ‘micro-CT’ 3D  imaging that assesses cortical and trabecular bone microstructure and strength, an international expert told the 7th Asia-Pacific Osteoporosis Conference in Sydney.

However it will be some time before technologies such as high-resolution peripheral quantitative CT (HR-pQCT) take the place of the current clinical standard of DXA, Professor Serge Ferrari told the conference organised by the International Osteoporosis Foundation.

He said new imaging modalities are needed because most fragility fractures occur in people who do not have osteoporosis as defined by DXA T-scores or clinical risk factors (FRAX).

Areal BMD does not equate to bone strength, and tools that incorporate trabecular bone scores (TBS) provide only modest improvements in fracture risk prediction, he noted.

Therefore it is important to look at direct methods of assessing bone microarchitecture and strength, such as peripheral CT measures, which are a more practical option for clinical practice than spinal CT, suggested Professor Ferrari, who is Head of the Clinical Service and Research Laboratory of Bone Diseases, Geneva University Hospital.

Professor Ferrari said there had been four important studies that had shown that measures of radius microarchitecture could improve prediction of fragility fractures.

The most recent, the Bone Microarchitecture International Consortium (BoMIC) prospective study of 7254 people with five years follow up, found that HR-pQCT measures of deficits in trabecular and cortical bone density and failure load at the distal radius and tibia improved prediction of fracture beyond aBMD or FRAX scores alone.

Published in the Lancet Diabetes and Endocrinology, the study was the strongest evidence to date that new imaging methods could improve fracture risk prediction, particularly for osteopenic people and those at imminent risk of fracture, according to Professor Ferrari.

But he cautioned that there were still many unanswered questions around HR-pQCT, such as hip fracture prediction ability, and the high cost of around $300,000 for the micro-CT equipment would make it unlikely to be adopted for widespread use.

“The next challenge will be to see whether going back to our standard commonly available tools such as DXA we can capture not all but part of that risk that is associated with microstructure,” he said.

And there is some preliminary data to suggest DXA and ultra distal radius will capture 50-60% of the microstructure alterations that we’ve seen by micro CT and therefore could be incorporated into our prediction models.”

Another presentation at the meeting noted that a HR-pQCT model of fracture risk prediction know as STRAX is about to start at Austin Hospital in Melbourne.

But Professor John Eisman of the Garvan Institute in Sydney said it was likely that such micro-CT methods would remain as research settings for the near future.

“It is being used as a research tool at this stage and it does give additional information, but as he [Professor Ferrari] suggested there may be other ways of gathering this data on bone fragility from less sophisticated tools,” he told the limbic.