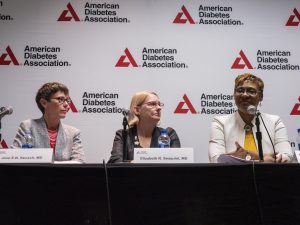 Gender bias in the diabetes professions will limit opportunities to improve patient outcomes if women are sidelined in research, clinical trials and provision of clinical care, attendees at the world’s largest diabetes conference have heard .

It also had the potential to damage research integrity and result in a loss of talent especially from male-dominated professions in science and medicine.

Professor Elizabeth Sequist, director of Endocrinology and Diabetes at the University of Minnesota, said diabetes was a very complex disease that required the combined talents of everyone to solve.

“And in order to get the best out of everyone, we need to have an equitable environment where everyone can be encouraged to make use of their talents for this very important mission to help people with diabetes. Hopefully we will have a cure one day and until then, we need to minimise the burden.”

Professor Sequist said prestigious journals such as JAMA and the New England Journal of Medicine were writing about the #MeToo movement and the National Academy of Sciences had just released a 311-page report on Sexual Harassment of Women.

“I think this is resonating everywhere and especially with the National Academy of Sciences report, they did not write 311 pages last week. They’ve been working on this for a long time and recognising this is an issue.”

“With Title 7 [of the Civil Rights Act, prohibiting employment discrimination] we are now being reminded that the law requires staff and faculty to report episodes of gender bias that they witness if those events will have an impact on the person’s ability to study or complete their work.”

Professor Felicia Hill-Briggs, a clinical psychologist from the John Hopkins University School of Medicine, said gender bias was still a problem for women-predominant professions when the bias applied to the disciplines as a whole.

This translated into less emphasis on these services for patients with diabetes despite the well-known importance of social determinants of health, behaviour and lifestyle on the disease.

“We do know that rates of depression, what we call psychosocial distress or diabetes distress, anxiety and eating disorders are high in diabetes. These are the types of disciplines – that fall in the women-predominant category – that address these.”

Professor Jane Reusch, from the University of Colorado and ADA president of Science and Medicine, announced the new Women’s Interprofessional Network of the ADA (WIN ADA) to strengthen the voice of women in diabetes research and clinical practice.

She said there was a need for gender equity in research including the inclusion of women in clinical trials.

“The data that we have available for the care and provision of women with diabetes and other diseases is often based on data primarily generated in men.”

She said the ADA and the American Heart Association had been looking at gender bias in the diagnosis of cardiovascular disease and in the implementation of standards of care in women such as blood pressure, cholesterol and as well as glucose control.

“Women are an integral part of our nation’s workforce, and I am proud there has been an increase in the number of women entering careers that focus on science and medicine,” she said.

“Unfortunately, there are still barriers to be addressed, yet discussions such as this create pathways and facilitate enhanced opportunities for clinicians and researchers. Ultimately, this will result in optimal care for people with diabetes.”