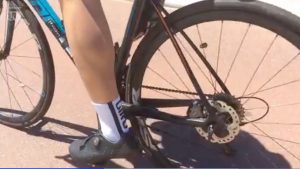 A very-low-carbohydrate, ketogenic diet has proved to be a “viable nutritional strategy” for an endurance cyclist with type 1 diabetes.

The case study, reported in Diabetic Medicine, showed a diet heavy in bacon, eggs and dairy sustained a 37-year-old Australian man on a 4,000 km cycle over 20 days.

His adventure was notable for “remarkable glycaemic stability” and only a single episode of symptomatic hypoglycaemia.

The authors of the case report, including Dr Joey Kaye from the Sir Charles Gairdner Hospital in WA, said very-low-carbohydrate diets have been shown to improve glycemic control in diabetes but not in the context of exercise.

The cyclist, identified as NM, had been on a very-low-carb diet for four years before his ride. His meals, on average, consisted of <10 g carbohydrate, 40–50 g protein and 70–90 g fat.

A representative day’s intake included bacon and eggs with salad for breakfast and dinner, chicken and salad for lunch, and coffee washed down with butter, oil or double cream.

Continuous glucose monitoring over the duration of the ride showed his blood glucose remained in the target range of 3.9–10 mmol/l for 80% of the time.

A single hypoglycaemia episode half way into the ride – in the context of strong headwinds and challenging terrain in the preceding two days, a lower-protein dinner the prior evening and a later breakfast than usual – required a brief interruption to administer carbohydrate.

“One of the key insights gained from NM’s ride was that such stability could be achieved without dependence on regular carbohydrate consumption to maintain euglycaemia and that the reduced glycaemic variability seen with very-low-carbohydrate ketogenic diets could also extend to when these individuals exercise.”

They said the observed glycaemic stability was a significant contributor towards the success of the ride.

The report noted that the cyclist’s total and LDL-cholesterol were high and that the relationship between the ketogenic diet and dyslipidaemia remains uncertain.

“The long-term cardiovascular implications of dyslipidaemia in the context of ketogenic diets, particularly in individual with type 1 diabetes, is unknown,” they said.