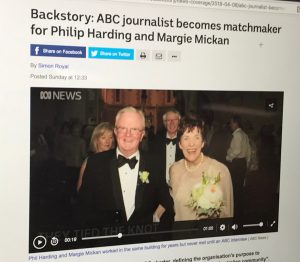 Retired endocrinologist Dr Philip Harding AM has been in the news this week – not representing the Endocrine Society of Australia or the AMA that he served for so many years, but for finding new love in the old Royal Adelaide Hospital.

Dr Harding, head of endocrinology at the hospital between 1976 and 1997, was introduced to a former RAH nurse Margie Mickan, as part of ABC news coverage of the hospital closure in 2017.

While they had both worked there at the same time more than 50 years ago, their paths did not apparently cross until the ABC interview last year.

The ABC, now claiming ‘matchmaker’ status, reported the introduction led to a marriage within six months.

Dr Harding is a former president of the AMA SA branch, chaired the Federal AMA Ethics and Social Issues Committee and was a member of the Australian Health Ethics Committee of the NHMRC.

He was appointed a Member of the Order of Australia (AM) in the 2017 Australian Day Honours list for service to medicine as an endocrinologist, to medical ethics and standards, and to the community.