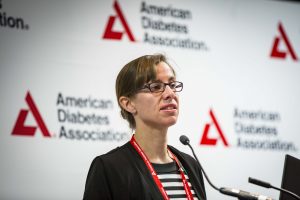 The 2018 ADA Scientific Sessions was told that the Restoring Insulin Secretion Study (RISE) is the first to provide direct evidence of the different course of the disease in youth.

The research, also published in a series of papers – here and here – with a Commentary in Diabetes Care, suggests young people will be struggling to control their glucose early in life and are therefore likely to experience complications later in life.

“And what we found in that study was that 50% of the youth in TODAY needed to go onto insulin within one year of being in the study. This dramatic need for insulin was surprising to us and disturbing that youth-onset diabetes seemed so aggressive and this is different to what is typically seen in adults which is more insidious.”

“So the thought was that maybe we intervene too late. Maybe we needed to back up and give treatment earlier and that’s what RISE did. We gave therapies right at the time of diagnosis of type 2 diabetes in youth and then backed up even further and gave the treatment to youth with impaired glucose tolerance or prediabetes to see if we could stall this process.”

“I want to point out we were using insulin in youth with prediabetes or just diagnosed with diabetes …so this was an aggressive intervention.”

Pre- and post- treatment measurements of beta-cell function including the acute C-peptide response to arginine (ACPR max) showed there had been no sign of improvement.

She said HbA1c improved slowly untll about six months into the study however it was not sustained.

“Despite the fact they continued to take medication for the next six months, their blood sugars gradually began to rise and by 15 months, after the wash out, they were significantly higher than when we started.”

She said the findings contrast with those in adults who showed an improvement in beta-cell function both with metformin and insulin for diabetes prevention and treatment.

“Despite interventions done at an early phase in youth who had impaired glucose intolerance or were newly diagnosed with type 2 diabetes, the beta-cell dysfunction progressed and was worse than at baseline showing no impact of early therapy.”

“Since these are the only FDA-approved therapies for youth with type 2 diabetes, we clearly now need to understand more about these youth, why their diabetes is more aggressive and how we can better treat them.”