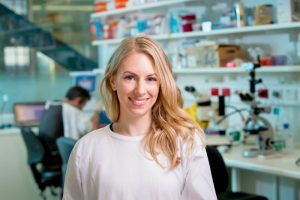 One of Australia’s top science awards – the Eureka Prize for Outstanding Early Career Researcher – has gone to a Victorian researcher investigating the unique immune cell populations that reside in skin and mucosa.

Associate Professor Laura Mackay from the University of Melbourne’s Doherty Institute was announced as the winner for her work into the of CD8+ tissue-resident memory T (TRM) cells, which reside permanently within epithelial layers of peripheral tissues such as the skin and mucosa without circulating in blood.

On receiving the award at the Australian Museum Eureka Prize dinner, she explained that TRM cell populations are crucial for immune protection against infection such as scarlet fever and tumours including melanoma. They also have a role in immune disease such as psoriasis, she added.

“Harnessing these cells will be key for the development of new immunotherapeutic strategies against disease,” said Dr Mackay.

TRM cells are distinct from the circulating T cells that control tumour growth, and are largely excluded from epithelial tissue in the absence of infection or overt inflammation.

Increasing evidence suggests that TRM cells are found in diverse human solid cancers where they correlate with improved prognosis and can protect against tumour challenge in mice.

This has included using an in vivo melanoma model to investigate how TRM cells act in the establishment and maintenance of tumour-immune equilibrium in skin.

“What we’d really hope and what we hope to translate all our…results towards is the generation of new immunotherapies that will incorporate these tissue resident memory T cells and will harness them to give us better protective responses against a wide variety of infections and also enhance tumour immunity,” Dr Mackay said.