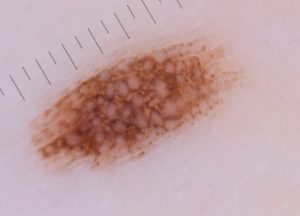 Melanoma risk is better predicted by the numbers of naevi in distinct categories such as non-specific, reticular and globular rather than total body naevus counts (TNC), according to Queensland research.

In a review of dermoscopic images for 27,221 naevi ≥5mm in diameter from 1266 individuals, researchers at the UQ Diamantina Institute also uncovered the specific gene variations that predispose to particular nevus morphologies.

The findings come from naevus data and genome-wide associations of melanoma cases and controls within the Brisbane Nevus Morphology Study (BNMS).

Lead researcher Associate Professor Rick Sturm said the findings were consistent with the transition of other dermoscopic patterns to a nonspecific morphology with increasing age.

“The number of common acquired naevi with particular dermoscopic patterns may allow a slightly better assessment of melanoma risk,” he wrote in the Journal of Investigative Dermatology.

“For each additional nonspecific naevus, the risk for melanoma increased by approximately 2%. The combined homogenous/complex nevus types made up 83% of our cohort; as such, this is consistent with increased risk with increasing TNC.

Incorporating globular and reticular numbers in the model increased the melanoma predictive accuracy by approximately 1%.

Dr Sturm said the globular and reticular mole patterns were also found to change over time.

“Globular patterns were shown to decrease as we get older, typically petering out after the age of 50 to 60,” he said.

“Reticular moles also decreased over time but were likely to head down a more dangerous path and develop into the non-specific pattern.”

The study highlighted the major relationships between genes and the number of moles and patterns, Professor Sturm said.

“Certain gene types influenced the number of different naevi types – for example, the IRF4 gene was found to strongly influence the number of globular naevi found on the body.”

The findings should help dermatologists to better understand mole patterns and provide more holistic care to patients who may be at risk of melanoma, Professor Sturm suggested.

“For a long time, clinicians have been interested in how pigmented moles relate to melanoma and melanoma risk,” he said.

“With the availability of dermoscopes and imaging, these results provide a new layer of understanding to guide clinical practice.”