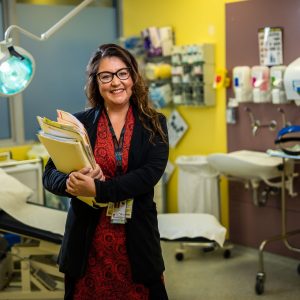 Dermatology registrar Dr Dana Slape is cautious about talking to a journalist.

She’s uncomfortable with what might look like self-promotion but, on the other hand, she knows that people are interested in the first Indigenous doctor through – almost through – the ACD training program.

“I’m not interested in the media spotlight for me as an individual but I understand and embrace that it’s part of my job to discuss the importance of Indigenous health and Indigenous people in speciality training spaces because it’s still emerging as an area of priority.”

What gets her over the line in talking to the limbic is the fact that she might be, by default, a role model and an example for other young people from an Indigenous background.

“I like the idea of a medical student who is Indigenous starting medical school and reading that there is somebody that has walked this path already.”

She says she looked up to Dr Kelvin Kong, “a wonderful ENT surgeon who is Aboriginal” as a mentor – someone to go to about exams, fears and concerns, and to discuss the impact of a medical career on her life and her loved ones.

“That can’t be underestimated – to have somebody who has done it before you.”

Dr Slape has passed her exams and is finishing off the training year with rural rotations from her substantive position at Westmead Hospital. She talked to the limbic from Dubbo.

She will be the first Indigenous dermatologist but there are two more following close behind.

“To go from zero to three dermatologists with an Indigenous heritage in the space of three years; that’s a remarkable achievement for us and for the College.”

“It’s really only happened because of a deliberate plan by the College of Dermatologists with the Australian Indigenous Doctors’ Association to start to work on breaking down those barriers and attitudes.”

“That’s important because it feeds into how well we can take care of vulnerable members in our community.”

“I think that being Indigenous, coming from a different life background, makes me a patient and understanding doctor. I feel able to connect with people from all walks of life and that makes me able to do my job well.”

Dr Slape says she always wanted to be a doctor but didn’t have the early confidence.

“But in my mid-20s I realised that I really needed a vocation that brought me joy and satisfaction and so I figured that just trying to get in would be a good starting point.”

And she did much better than she thought she would.

Taking up medicine a bit later than most other people will also reinforce her message to young people that might have wondered about becoming a doctor, that they can have a go.

“An unusual journey helps people to know that things are achievable.”

She chose dermatology because it involved all ages, the potential to have a profound impact on improving quality of life and the opportunity to develop long-term relationship with patients and their families.

The concept of being able to recognise systemic disease based on the morphology of a rash was also “academically intriguing”.

She lists a host of skin problems such as scabies, pyoderma, kerion and “even out of control headlice” that are problems in communities that don’t have access to good health resources or adequate standards of living.

“Even skin cancers in Aboriginal and Torres Strait Islander people are much more prevalent and more likely to have worse outcomes than we ever realised.”

“All of these things can be traced back to common things like late presentation, inadequate access to healthcare, poor experiences in the healthcare system that leads to people not wanting to seek help, and people not feeling connected to people who are able to provide care for them.

She’s planning on combining some outreach work to Darwin and hopefully working in some urban areas of need in 2020.

Her father’s family is from the Top End but it’s also the huge burden of skin disease and the fact that only one dermatologist is regularly based there that attracts her.

“So if an extra visit from me gets to take care of people that need extra support in an area of need, then that is positive. And also of course there’s that whole role-modelling thing around young people seeing somebody like them working in their town providing care for people that they love. Hopefully, the downstream effect is educational aspirations for young people wanting to pursue these kinds of careers.”