Pictorial representations of cardiovascular risk using carotid ultrasound techniques may be useful in motivating patients to better adherence to medications and lifestyle change.

A randomised trial of about 3,500 people in a Swedish cardiovascular screening and prevention program compared the addition of a stylised representation of vascular age (intima media wall thickness) and plaque in the arteries to usual care.

At baseline and again at six months, the intervention group received the visual aid and brief written advice that atherosclerosis was modifiable with lifestyle modification and lipid-lowering or antihypertensive medications.

The study, published in The Lancet found that sharing pictorial representations of cardiovascular risk with patients and their doctors provided modest but significant benefit in terms of a reduction in the Framingham risk score (FRS). 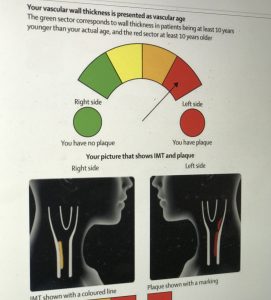 The use of lipid lowering medications increased in the intervention group and both total and HDL cholesterol improved significantly compared to the control group.

Systolic blood pressure and bodyweight also showed some improvements in the intervention group but were not statistically significant.

The European systematic coronary risk evaluation (SCORE) increased in both groups from baseline but to a greater extent in the control group.

The study said the effect of the intervention was largest in the patients at high risk for cardiovascular disease and with more advanced atherosclerosis, ‘indicating the potential of a clinically relevant effect’.

“Even small reductions in cholesterol and blood pressure levels are shown to have long-term benefits on cardiovascular events at a population level,” the study said.

“Furthermore, effects from lifestyle modification might add benefits beyond what is captured in FRS and SCORE – eg, reduction in inflammatory parameters, improved insulin sensitivity, weight loss or maintenance, a healthier diet, and increased fitness.”

The researchers said it was possible that adherence to evidence-based management of atherosclerosis was as important as the development of new treatment modalities.

A Comment in the same journal added that non-adherence to recommended medications was high and contributed to hospital admissions. However improving adherence had proven difficult.

“Currently, even with use of imaging techniques that provide striking detail about atherosclerotic lesions, it is not a common observation that emphasising pathogenesis or natural history of the disease improves patient behaviours.”

“Whether the results are sustainable and will reduce subsequent major adverse cardiac and cerebrovascular events requires longer follow-up.”