Victorian hospital is first to get next-gen cath lab system 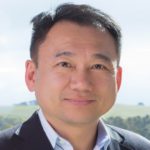 University Hospital Geelong is the first hospital in the southern hemisphere to offer a new generation of high-resolution, low-radiation cardiovascular x-ray imaging technology.

The new angiography suite is just one of just two in operation in the world – and the only one outside of the manufacturer’s German base, according to director Associate Professor Chin Hiew.

He says the angiography image quality difference is like the leap from standard-definition televisions to 4K high-definition screens.

“Having had a few weeks of experience with this machine, the image quality is spectacular without compromising the amount of radiation exposure,” he says.

“The radiation level is actually reduced by up to 70%, making it safer for patients and the staff operating the machine.

The new technology is also quicker, less noisy and it has additional features that eliminate the need for peripheral machines in the same lab,” he added.

Barwon Health was able to secure the machine before its worldwide release after visiting the Siemen headquarters in Germany when it was in development.

”We are now a reference site for hospitals across the country to do site visits and see the machine when they are considering installing one,” he said. According to the manufacturer, the ARTIS icono platform is based on an OPTIQ system that fundamentally redesigns image processing for 2D imaging.