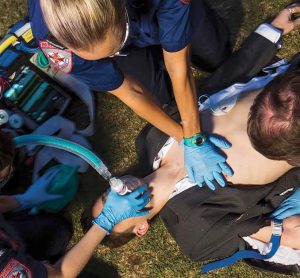 Survival rates after out of hospital cardiac arrest in Victoria are among the highest in the world, thanks to prompt paramedic treatment and transport to cardiac facilities, a new report shows.

Patients who have a shockable rhythm with a cardiac arrest witnessed by a bystander have a 37% rate of survival to hospital discharge, according to new figures from the Victorian Ambulance Cardiac Arrest Registry 2016/17 annual report.

The Utstein patient group rates compare favourably to those of other cardiac arrest registries such as London, the EU and New Zealand, all of which had 30% survival rates to hospital discharge. The Victorian figures were also slightly higher than WA (35%), and exceeded only by a registry in Seattle, which covered a much smaller area than that of the Victorian Ambulance Service.

The record levels of cardiac arrest survival were attributable in part to faster response times by Victoria’s Advanced Life Support and Mobile Intensive Care Ambulance paramedics, which achieved 7.7 minutes in 2016/17 – which meant that patients were being defibrillated within 9.2 minutes, one minute faster than last year.

The report, covering 6034 out of hospital cardiac arrests, also showed that bystander CPR rates were high (61% compared to 42% a decade earlier) and that use of public automated external defibrillators had increased to 80 from 73 cases over the previous year.

Long term outcomes were also good, according to follow up phone interviews that found most survivors maintained their independence and had a good quality of life at 12 months, and 77% had returned to work.

Launching the report, Victorian Premier Daniel Andrews said the improvements showed the importance of every second counting when responding to a cardiac arrest.

“In Victoria, we have among the very best cardiac arrest survival rates in the world. Despite increasing demand, paramedics are getting to life-threatening emergencies like cardiac arrests faster than ever before,” he said.

The report authors said there were about 30,000 out of hospital cardiac arrests in Australia every year and typically, less than 10% of arrest patients survive.

“However, when cardiopulmonary resuscitation (CPR) and defibrillation are provided quickly, alongside an effective system of care, the chances of an arrest patient being resuscitated and having a good neurological recovery greatly increases,” said Professor Karen Smith, director of Ambulance Victoria’s  Centre for Research and Evaluation and medical director Professor Stephen Bernard.

They noted that Victoria’s Advanced Life Support paramedics had the ability to give intravenous adrenaline and MICA paramedics who are were authorised to perform endotracheal intubation, rapid sequence induction, Pneumocath insertion and administer a wider range of medications and pre-hospital thrombolysis.