Have you ever tried learning to knit? If you have, if nothing else, I bet you have a nice, multi-colored Tom Baker-like scarf at home. Perhaps with a few holes where you dropped a stitch or two, but all the same, a  proud testament to the fact that you mastered the knit and purl stitch.

I have one of those scarfs. I made it during a knitting evening class several years ago. Well. Almost. I don’t have any dropped stitches in mine, but there is something rather fundamental missing… the purl stitch.

My tutor was very patient but it was hopeless. The purl stitch will always be a complete mystery to me. Why? Well, it’s possibly because I belong to the estimated 10% of the population that is left-handed.

Back in the day, my fate may well have been a rather hot and painful one while tied to a stake. Thankfully, a left-handed person’s problems are now rather more mundane. If you are right-handed, you probably haven’t even noticed this, but pretty much everything has been designed for you.

Scissors, knives, musical instruments, irons, computer mice and even ring-binder notepads (have you tried writing with a bit of metal pushing into the side of your hand?) are just a few of the everyday items that can cause difficulties for us southpaws. Not to mention that almost everything practical is taught – as far as we are concerned – the wrong way around; and yes, that includes knitting.

For many people, of course, it is just a minor irritation to work around. However, what if you are in a job where one slip can potentially cause serious harm or even death and the only tools to hand are ones that feel unnatural to use and force your muscles to work in uncomfortable ways?

Say hello to the world of the left-handed surgeon

It goes without saying that surgery can require a high degree of precision and dexterity. It is therefore vital that the surgeon is able to work in an environment that caters to their requirements and have access to  tools that they can use with ease.

With this in mind, Burdett and colleagues have published a paper on surgery tips for left-handed trainee cardiac surgeons and their trainers. Despite the problems that they can face, many left-handers do make good cardiac surgeons. However, Burdett et al do state that although any obstacles have been tackled successfully before, there is both a general lack of information, and an insufficient dissemination of any knowledge gained, which results in a lot of ‘re-inventing the wheel’.

They discuss how, with some preparation and modifications, left-handed cardiac surgeons can work alongside and be trained by those who are right-handed. And the first thing that they state is that, unless they are ambidextrous, trainees should not try and use their right hand. As I am very left-handed (I can barely hold a pen in my right, let alone write with it) I’d certainly say that this was sound advice!

Communication and preparation are key

After consulting left-handed cardiac surgeon trainees and both left and right-handed trainers, Burdett et al composed a list of tips.

Setting-up a theatre for a left-handed cardiac surgeon, for example, will be different to that for a right-hander. The scrub nurse, for example, should be advised in advance so that they can obtain the appropriate equipment and come well prepared to assist. The anaesthetic team also have to be told as they need to make modifications when setting up as left-handed surgeons need more elbow room.

They go on to describe potential techniques for opening during surgery, cannulating the aorta, harvesting of conduit (for coronary artery bypass grafting) and even how best to take a patient off bypass. 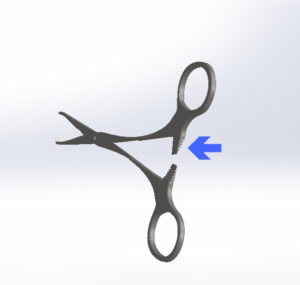 Left-handed instruments are seen to be essential. Unfortunately, they are generally not available in many surgical centers as standard and, as a trainee, it may be difficult to make a case of finding the funds to purchase them, particularly as they are more expensive than the right-handed equivalents. Buying their own is an option but, of course, expensive.

The right tools for the job

Burdett et al have also written a guide for cardiac surgeons that describe some of the key differences in surgical tools for left and right-handed surgeons often used in cardiac surgery, explaining why these different tools are needed and give tips on their use.  This includes needle holders, instruments that hold needles for suturing during surgery.

Needle holders are typically locked in place when closed using a ratchet, which basically consists of toothed serrations in the shanks of the instrument that, when the instrument is closed, slot together. Needle holders are used for delicate work and are locked and unlocked very frequently when in use, so it’s vital that the surgeons using them find them as easy to use as possible.

In order to open the needle holder, a right-handed surgeon simply pushes down the upper handle with their thumb. This results in a shift of the teeth that are part of the rachet attached to the upper handle away from those of the lower handle. The instrument then unlocks and opens up (see figure 1). 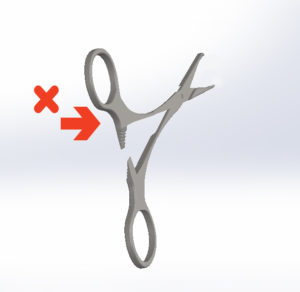 However, when the holder is placed in the left hand, the same pushing action is now from the opposite side and pushes the two shanks closer together with the teeth still locked in place. The left handed surgeon must therefore place their fingers in the holes in the handle to pull the two shanks apart. This movement does not feel as natural as the former and is not as easily controlled (see figure 2).

It is only with a left-handed needle holder, with the serrated teeth locked in the opposite direction, that the left handed surgeon can push the instrument open with their thumb in the same way as their right-handed counterparts (figure 3).

Learning to do it both ways
Although training solely with a left-handed surgeon is neither recommended or practical, a left-handed trainee may find it beneficial to do so at certain points during their training, particularly when learning how to use left-handed tools and techniques.  If one isn’t available, there are tutorials available on the Left-Handed Cardiac Surgeons club YouTube channel.When assisting, the equipment on offer is likely to be right-handed. Instruments used in assisting do not require the same level of skill as needle holders for example, so trainees should learn how to use them with both their right and left hand. 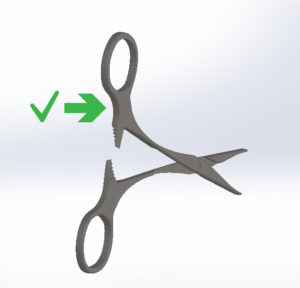 With 90% of the population being right-handed, all too often, left-handed people are left to adapt to this the best that they can to a world that simply isn’t designed for them. There are instances, however, when it’s vital not to ignore the requirements of left-handed individuals. There are a number of barriers to overcome if a left-handed person wants to become a cardiac surgeon, but with co-operation and a few modifications, it is hoped that they will find their training at least no more challenging than their right-handed counterparts.

Liked the blog? Now read the research: Left handed cardiac surgery: tips from set up to closure for trainees and their trainers