Robotic surgery may not be best for mitral valve repair 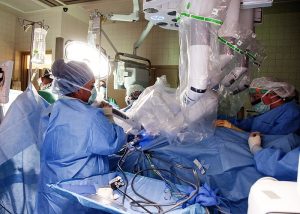 Minimally invasive (mini) surgery may trump robotic surgery for mitral valve repair, because it is associated with lower rates of atrial fibrillation and blood transfusions, and a shorter hospital stay, according to the first multicentre comparison of different procedures.

While robotic surgery achieved higher repair rates than conventional keyhole surgery or sternotomy, it also involved significantly longer procedural times and greater use of hospital resources for the same outcomes, a US study found.

Writing in the journal Heart, cardiac surgeons from the University of Virginia say that mitral valve repair is the most common heart operation performed using robot assisted surgery. But to date few studies have compared it with keyhole and conventional surgical techniques, except in single centre reviews.

The researchers therefore drew on a comparison of 2300 patients who needed planned mitral valve repair surgery between 2011 and 2016, and who were allocated to either robotic surgery (372), keyhole surgery (576), or conventional (1352) sternotomy.

Rates of successful repair were high (91%) in patients undergoing robotic and keyhole surgery and lower (76%) in those who had conventional surgery despite similar rates of degenerative disease across all the cases.

The robotic procedure took the most time to perform – 224 minutes compared with 180 minutes for keyhole and 168 minutes for conventional surgery.

The robotic approach had similar outcomes to the conventional approach except that there were half the number of onward discharges to further care–7% vs 15%–and one day less spent in hospital.

But compared with keyhole surgery, robotic surgery required more blood transfusions (15% vs 5%), was associated with higher rates of atrial fibrillation (26% vs 18%), and one day longer in hospital, on average.

The authors conclude that there are pros and cons to each of the techniques, and also noted that robotic surgery comes with a significant learning curve and implications for the first 200 patients who have the procedure.

“From a patient perspective, all three approaches provide excellent outcomes, thus patient preference and surgeon experience should dictate the approach for mitral valve surgery,” they said.