Prediction tool recommended for all women with pre-eclampsia 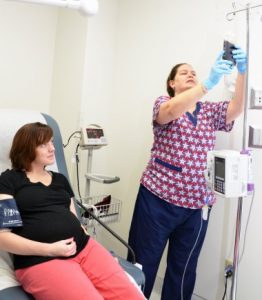 Women with pre-eclampsia should be assessed early with a prediction tool that can accurately identify those who are at risk of rapid deterioration to life threatening organ damage, Victorian clinicians say.

The fullPIERS (Preeclampsia Integrated Estimate of Risk) model – based on parameters such as chest pain, oxygen saturation and creatinine levels– is now suitable for adoption into clinical practice after being validated in several studies, according to  Dr Kirsten Palmer and colleagues  in the Department of Obstetrics and Gynaecology at Monash Medical Centre, Melbourne.

By using the model, clinicians can identify more than 75% of women with early eclampsia whose hypertension will rapidly progress to cause serious morbidity and mortality, they write in Hypertension journal.

Women identified by a high risk score could be prioritised for early treatment with steroids, transfer to a specialist centre and if necessary expedited delivery, they suggest.

They note that the fullPIERS model was previously validated in a cohort of 2023 women admitted to tertiary care facilities in developed countries including Australia. It has now been validated in three further cohorts of women with early-onset pre-eclampsia, their commentary notes.

The validation study showed that 13% of women with pre-eclampsia had an adverse outcome during their admission, with 40% occurring within the first 48 hours of admission.

They say the risk prediction model was designed to be pragmatic and easy to use, and requires only six variables:

The model could be integrated into  practice, but the Victorian clinicians baulked at the recommendations from its developers that all women with a high score should be delivered immediately, given the possibility of false positives.

“Given the serious implications arising from inflicting significant prematurity when iatrogenically ending a pregnancy affected by early-onset preeclampsia, the impact of false positives are not at all trivial. Thus, caution needs to be exercised in initiating iatrogenic preterm delivery based on fullPIERS risk stratification alone,” they said.

Rather than being the overriding factor in clinical decision-making, it could be a powerful adjunct tool to help guide clinicians, they suggested

“In some cases where there is true indecision among clinicians whether or not to deliver the preterm preeclamptic patient, the tool could be used to break that equipoise. Alternately, a patient stratified as high risk but in a facility replete with full obstetric and neonatal facilities, delivery could still be delayed in the interest of gestational advancement, but the patient watched like a hawk for signs of deterioration,” they advised.